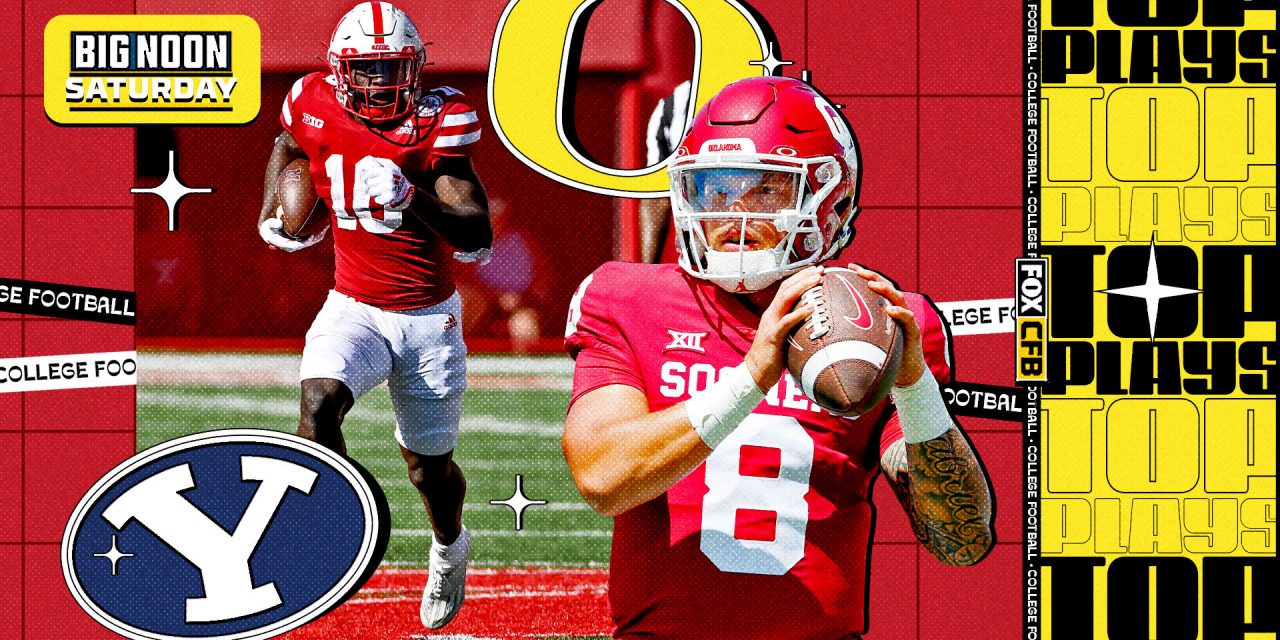 , Week 3 of the college football season is underway with Oklahoma, Nebraska, Baylor and more in action. Here are the top plays!,

Week 3 of the college football season is underway as the No. 6 Oklahoma Sooners kicked off the day with a dominant victory over the Nebraska Cornhuskers.

Elsewhere, No. 17 Baylor stifled Texas Tech in a massive scoring outburst. No. 12 BYU fell to No. 25 Oregon on FOX, while No. 22 Penn State defeated Auburn.

Later, No. 3 Ohio State hosts Toledo on FOX, while No. 13 Miami (FL) faces No. 24 Texas A&M in College Station. Closing things out tonight, Fresno State hits the road to take on No. 7 USC on FOX.

Here are the top plays from Saturday’s Week 3 slate.

Leave it up to me

Oregon’s offense began making waves in a hurry to open the affair. Bo Nix kept it himself on a 2-yard scamper to round out a four-play, 64-yard drive for the Ducks’ opening score.

BYU got itself on the board as QB Jaren Hall faked left, faked right and then found tight end Isaac Rex for the TD.

Just throw the ball in the vicinity of Troy Franklin. He’ll go up and get it. Franklin’s huge 50-yard catch set up a two-yard QB dive from Nix to push Oregon ahead, 17-7.

Fit it in there

Nix was undoubtedly the MVP of the first half for the Ducks, following up his rushing TD with a passing one on a 15-yard laser to Terrance Ferguson. Nix completed eight of nine pass attempts for 135 yards, and Oregon led 24-7 at the break.

The rout is on

Fresh off a touchdown to begin the second half, Oregon found the end zone again on its next possession. Nix connected with Ferguson on a 9-yard passing score, giving the Ducks a commanding 38-7 lead.

Well, the jarring blow didn’t keep Clifford at bay. The senior QB responded in the best way he could: With a rushing TD to give Penn State an early edge.

Freshman Kaytron Allen notched the first TD of his college career with a nifty cutback at the goal line to walk in to the end zone unscathed. The play capped an 11-play, 68-yard drive, and helped the Nittany Lions take a 14-6 lead into halftime.

Nicholas Singleton does it himself

The Nittany Lions gave Singleton the ball three times on what became a three-play scoring drive. Singleton started the drive with a 53-yard run and later punched in a 1-yard score.

Allen rushed in his second touchdown of the day, putting Penn State up 31-6.

The Tigers scored their first touchdown of the afternoon, as Robby Ashford found Jarquez Hunter for a 22-yard score. Auburn failed a two-point conversion attempt.

Penn State continued to do damage on the ground, as Singleton ran in his second touchdown of the day. This one went for 54 yards.

Is there a better entrance in all of college football than when the Cornhuskers take the field at Memorial Stadium? One word … electric!

It’s Nebraska junior Trey Palmer, and he’s got reservations for SIX. The junior wide receiver ran a perfect route and Cornhuskers QB Casey Thompson put the biscuit in the basket to give Nebraska a 7-0 lead.

Dillon Gabriel showing off the wheels

Nebraska struck first, but it didn’t take long for the Sooners to answer right back. Gabriel stepped up in the pocket, kept it himself and took it 61 yards to the house.

Oklahoma wasted little time putting more points on the board after its first score. The Sooners utilized a quick-tempo offense to exhaust Nebraska’s D and find the end zone courtesy of a pretty dime form Gabriel to Jalil Farooq, who lifted a silencing finger to his mouth in celebration.

This isn’t the traditional way we see teams score touchdowns, but Oklahoma’s having itself an extraordinary party on the road. Gabriel threw a screen pass to tight end Brayden Willis, who then threw a perfect 24-yard strike to a wide–open Marcus Majors for the score.

OU took a 49-7 lead three minutes into the third quarter. Theo Wease went up among the trees to reel in a difficult 15-yard snag, marking Gabriel’s second passing TD of the day.

Right up the GUT!

Baylor running back Richard Reece took the handoff and went right up the middle, untouched for a 14-yard score to give the Bears an early 7-0 lead.

Baylor doubled its lead early in the second quarter as running back Craig Williams took the handoff and turned on the jets, taking it 30 yards for the score. Williams did an impressive down of staying in bounds as his run gave the Bears a 14-0 lead.

Quarterback Blake Shapen extended the Bears’ lead after freezing the defense on an option play, and sprinting 35 yards to the house. Baylor led 21-7 at the half.

Put a bow on it

Reese was the star of the show Saturday, and he capped his spectacular day with a pair of big romps for six. Reese finished the matchup with 156 yards on 19 carries (8.2 yards per carry), and three scores on the ground.

BEST OF THE REST

It was a beautiful scene at Notre Dame Stadium ahead of the team’s matchup against Cal.

Former Notre Dame linebacker Manti Te’o was noticeably emotional as he was honored ahead of the game during the pregame presentation to the color guard.

Te’o addressed the home crowd before kickoff. He received a roaring ovation from Irish fans.

Jackson State has been on a roll to start the season, and Shane “Hollywood” Hooks said “keep the cameras on” with this acrobatic, one-handed grab against Grambling State.

The probability of Indiana winning this football game was incredibly low. The Hoosiers trailed for most of the second half, and even fell behind by 11 in the fourth quarter.

But a clutch turnover, late game score, and colossal two-point conversion forced the game into OT, where the squad came up with this pair of powerful plays to steal it.

Bring the house down!

Syracuse kept its unbeaten record in the final seconds vs. Purdue to go 3-0 for the first time since 2018. Garrett Shrader and Oronde Gadsden II had the heroic hookup with seven seconds left, completing a 25-yard back-shoulder fade to propel Syracuse to a 32-29 victory.

DO YOU BELIEVE IN MIRACLES!?

Trailing 28-26 with 0:02 remaining on the clock, Appalachian State QB Chase Brice dropped back and heaved a Hail Mary pass, which was tipped and landed in the hands of Christan Horn for the game-winning touchdown!

Toledo at No. 3 Ohio State

The Buckeyes continue the electric passing game with Julian Fleming reeling in a nimble touchdown pass from C.J. Stroud.

Toledo staying in it

No. 11 Michigan State at Washington

The Huskies scored on the game’s opening possession, as Michael Penix connected with Ja’Lynn Polk. 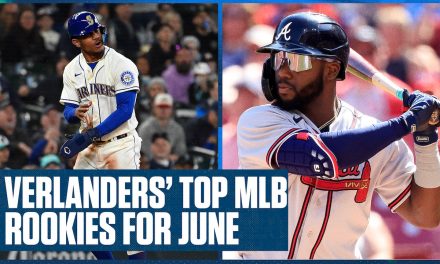 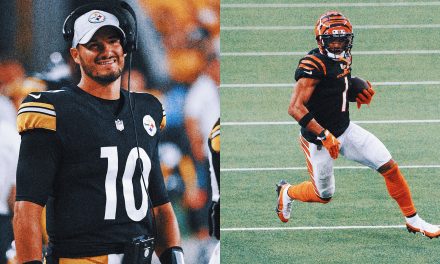 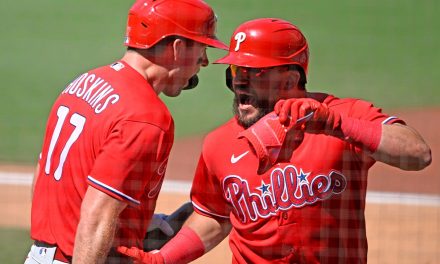 Kyle Schwarber hits go-ahead three-run homer in seventh to put Phillies ahead of Padres for good,