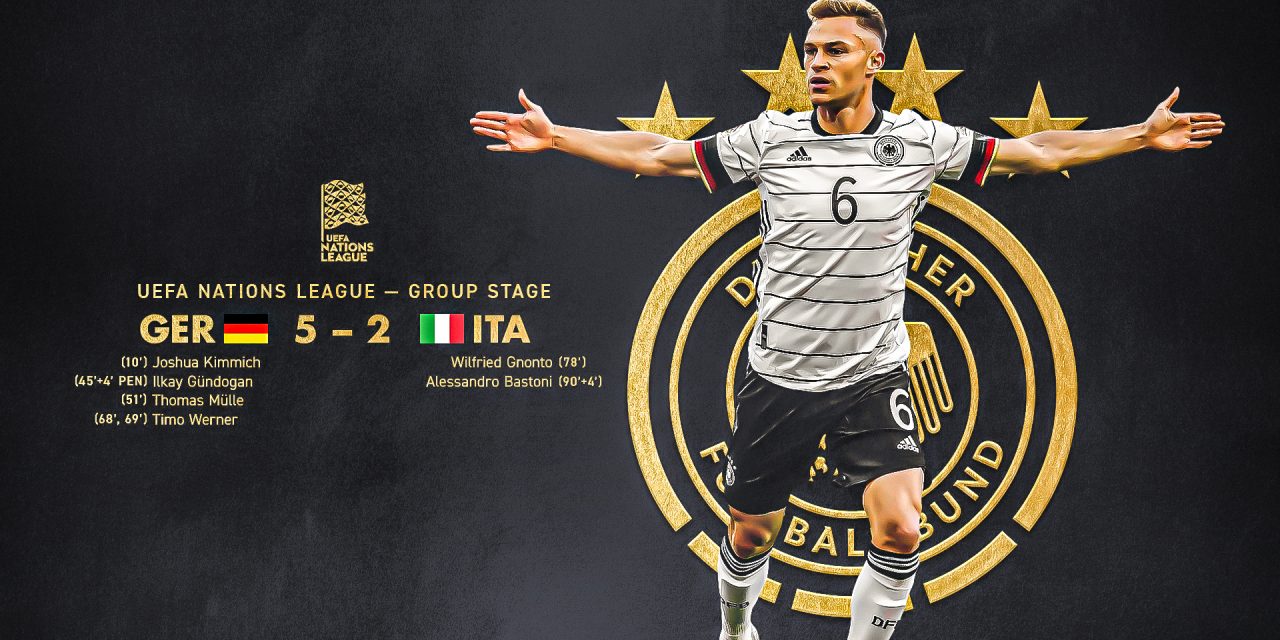 , Italy conceded five goals to Germany on Tuesday in the UEFA Nations League. Doug McIntyre breaks down what’s next for both sides.,

On the final day of June’s two-week UEFA Nations League marathon, Germany served up one of the most eye-popping results of the 2022-23 tournament so far by dismantling fellow four-time World Cup champion Italy5-2 in Monchengladbach.

Joshua Kimmich opened the scoring for the hosts just 10 minutes in, and Ilkay Gundogan doubled the Germans’ advantage from the penalty spot just before halftime. Thomas Muller made it 3-0 shortly after the break, and Timo Werner ensured the lopsided scoreline with a pair of goals later in the second half, including this beauty.

Timo Werner scores to extend Germany’s lead vs. Italy on Tuesday in the UEFA Nations League.

Italy got two late consolation strikes but were thoroughly outplayed, and the final result flattered them.

Here are three quick thoughts on the match.

More misery for the Azzurri

Less than a year after winning the Euros, Italy’s legendary national team — only mighty Brazil has won more World Cups — is at perhaps its lowest point ever.

Italy missed their second consecutive World Cup in March, a previously incomprehensible failure. That elimination came to tiny North Macedonia in the European playoffs made it worse. Italy were then humiliated 3-0 in the Finalissima against South American champ Argentina two weeks ago. Now, after Roberto Mancini’s team seemingly stopped the bleeding with a win over eventual Group 3 winner Hungary, plus a draw in England and another at home against the Germans last week, there was this.

Make no mistake: Mancini’s side were utterly humiliated in their fourth and final match this month, despite the meaningless late tallies by Wilfried Gnonto and Alessandro Bastoni. The gaudy result was a reminder of how much lasting damage can be caused by missing the sport’s most important event, let alone twice in a row.

The Italian FA opted to keep Mancini despite the qualifying disaster. Their resolve will surely be tested again after the Azzurri’s capitulation Tuesday. Whether Mancini stays or goes, this is a wounded player pool badly in need of stability as the next generation of Italian stars, some of them on this current team, comes through the ranks.

Italy is still one of the world’s great soccer countries. They’ll be back. In the meantime, some serious soul-searching — and rebuilding — awaits.

Check out the highlights from the UEFA Nations League match between Germany and Italy, in which Germany established their dominance with a 5-2 victory.

A statement win for Germany

Germany’s last few years haven’t been great, either. They went out in the first round of the 2018 World Cup. After Germany were eliminated by old enemy England at last year’s Euros, the 15-year tenure of manager Jogi Loew came to an end, with former Bayern Munich boss Hansi Flick taking charge in September.

His record so far speaks for itself. Germany are undefeated in 13 games under Flick. Die Mannschaft are a rebuilding team themselves — or at least they’re supposed to be. But their squad is absurdly deep; UEFA Champions League winners Leon Goretzka and Kai Havertz didn’t even get off the bench against Italy, and another, Serge Gnabry, entered as a second-half substitute.

On this form, Flick’s picks are looking like more than just a favorite to win the Nations League next summer. While they weren’t overly convincing in all their June games, Germany are clearly a program heading in the right direction. If that momentum continues into the fall, this German team looks well capable of winning a fifth World Cup for their country next summer.

Joshua Kimmich finishes in close after a fantastic touch to give Germany a 1-0 lead over Italy.

Intriguing September looms for both teams

Before Qatar 2022 kicks off in November, there are a few more Nations League matches to play. As good as Germany looked Tuesday, how they fare in two September games — home to Hungary, away to England — will provide a clearer assessment of their World Cup chances.

Italy’s next test comes soon enough after Tuesday’s debacle. England might be a formidable foe, but the Azzurri have nothing to fear. They haven’t lost to the Three Lions in their past two meetings, both on English soil, and somehow Gareth Southgate’s team is coming off an even worse defeat than the one Italy just suffered, with Hungary posting a 4-0 win in Wolverhampton to knock England into last place.

A victory against a (for now) World Cup favorite and former champ would help restore a measure of pride and morale for Italy, which travels to Bucharest for its final competitive game in 2022.

It’s going to be a long summer until then.

Get more from UEFA Nations League Follow your favorites to get information about games, news and more. 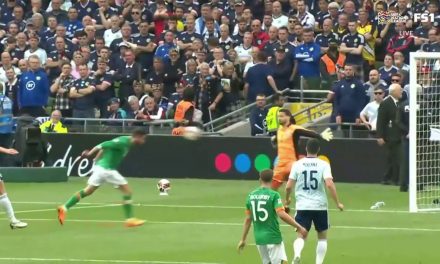 Ireland scores quickly to double their lead thanks to Troy Parrott, 2-0, 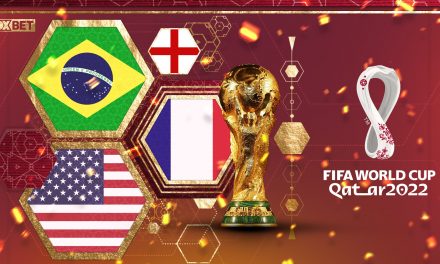 World Cup odds 2022: Lines for every team to win in Qatar,