During his 10 years as the head coach of John A. Logan (Ill.) CC, Smithpeters turned the program into one of the best junior college teams in the country. The Volunteers have gone 241-73 under Smithpeters. That includes eight years of 20 or more wins and at least half a dozen conference coach of the year awards.

“Kyle is a well-respected coach, regardless of level,” Gates said in a press release. “He is a great teacher, evaluator and recruiter. I have had a front row seat for 15 years watching him prepare for this opportunity, but also build John A. Logan College into the power it is today. After attempting to hire coach Smithpeters three years ago, I am excited to see him join the greats who have made this transition before him. It’s no better time to welcome coach Smithpeters and his family to our staff, the city of Columbia and Mizzou.”

GET THE INSIDE SCOOP WITH YOUR PREMIUM SUBSCRIPTION!

Smithpeters has coached eight junior college all-Americans, including point guard Sean East this past season, who was named the national Junior College Player of the Year, the second Volunteer to earn that honor playing for Smithpeters. East committed to Missouri last week.

“Excited and grateful to be joining Coach Gates and his staff at Mizzou,” Smithpeters said. “I have known Coach Gates for the better part of 15 years and his integrity and work ethic are at the highest standards. The opportunity to join a veteran staff at such a fine university was hard to pass up. The rich academic and athletic tradition represents everything a student-athlete should want.”

This is not Smithpeters’ first stint on a Division One bench. He was an assistant to Paul Lusk at Missouri State in Lusk’s first season taking over for Cuonzo Martin. The Bears finished third in the Missouri Valley Conference that season, but when Matt Imhoff retired as the head coach at John A. Logan, the school tabbed Smithpeters to replace him. Logan has won at least 18 games in every season since Smithpeters took over.

As a player, Smithpeters started his career at Vincennes College before transferring to Southern Illinois where he helped the Salukis to back-to-back NCAA Tournaments under Chris Lowery.

Smithpeters joins Charlton “C.Y.” Young and Dickey Nutt on the Missouri staff. Young was named the associate head coach two weeks ago and Nutt was added to the staff last Thursday.

PowerMizzou.com obtained contract details for Young and Nutt earlier this week. Young agreed to a three-year contract worth at least $600,000 annually. Nutt signed a one-year contract for $165,000. The assistant pool available according to Gates’ contract is $915,000, which means $150,000 remains for the Smithpeters hire.

The administrative staff for Gates remains somewhat unclear at this time, though PowerMizzou.com has reported that former Cleveland State assistant Ryan Sharbaugh is at Mizzou in an off-court role and Gates’ special assistant, Matt Cline, also followed him from Cleveland to Columbia. 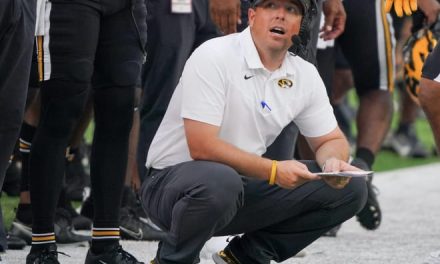 See-saw bowl ends up with Tigers on the short end