This is my Kentucky post-game column, v2.0.

I had the “Missouri isn’t nearly good enough at the line of scrimmage on either side of the ball to beat decent to good teams in the SEC” column mostly written late in the second quarter. For the record, I still believe that column is applicable–on both sides of the ball–but this no longer seemed like the night to write it. Or at least not to focus solely on it.

Missouri lost to Kentucky 35-28 on Saturday night in Lexington and even as I write this, I’m trying to figure out exactly how they kept it quite that close. Mark Stoops said at halftime “we were in complete control.”

He was right. Kentucky had 314 yards of total offense, including 218 rushing yards, at halftime. The Wildcats had held the ball fore more than 18 minutes, had averaged nearly eight yards per play, were 5/6 on third down and had just one penalty compared to five for Mizzou.

And yet Missouri hung around. They did so largely because of Jaylon Carlies, Connor Bazelak and Tyler Badie.

Carlies had an interception and forced a fumble in the first half (S. Utterback/USA Today)

Carlies intercepted a pass to thwart one Kentucky drive. Even though Missouri didn’t score off the interception, it kept the Wildcats off the scoreboard, which was something Missouri had trouble doing in the first 30 minutes. With less than two minutes to go and Chris Rodriguez about five feet from pushing Kentucky’s lead to 28-7, Carlies got a helmet on the ball and forced a fumble that was recovered in the end zone by Chad Bailey.

Bazelak went 5-for-7 for 55 yards and took Mizzou the length of the field in 97 seconds and the Tigers were suddenly in a one-score game at halftime despite being thoroughly dominated and physically whipped.

In the second half, Bazelak was intercepted on his first series and UK pushed the lead back to 14. He responded by going 6-for-7 for 43 yards and his second touchdown of the night to Daniel Parker Jr.

The Tiger defense joined the party in time to get force consecutive punts (Kentucky’s first and second of the night) and Bazelak drove Missouri 80 yards to a tying touchdown with 4:46 left to play.

All told, the Tiger quarterback led four scoring drives that covered 43 plays and 310 yards. He finished the night 34-for-52 for 294 yards, four touchdowns and one interception.

Badie had 24 touches for 149 all-purpose yards and a touchdown. He became the first Missouri running back ever to catch ten passes in a single game. At some point in the next two or three weeks, he will become the first player in 132 years of Missouri football to have 1,000 yards rushing and 1,000 receiving in his career. He had SEC Network analyst Matt Stinchcomb marveling that “the first guy hasn’t tackled Tyler Badie all night.”

So Missouri had some guys. It did not have quite enough of them. The Tigers came up just short because Wandale Robinson beat them deep on a long pass, Missouri never figured out an answer for Chris Rodriguez (27 carries, 207 yards, 3 touchdowns) except on the occasions he dropped the football near the goal line and Bazelak and his line completely failed to identify a blitz on third and six in the final drive.

There were things to like about the game. But it also pointed out quite obviously that Missouri has not yet arrived and highlighted the areas where the Tigers are falling short.

Mizzou’s offensive line overall was better than it was a week ago. It was better in the second half than it was the first. It was still not good enough. The defensive line was a non-factor all night long. The Tigers did have two sacks, but one of them was a result of Will Levis hanging on to the ball for approximately four minutes. The other came in the first half. Levis had time to throw all night and Rodriguez frequently wasn’t touched until he’d already done significant damage (the yards after contact will be interesting to see because I’d be willing to bet Kentucky ran for about half of its 341 yards before it was touched at all).

Was it alarming? Sure, a little bit. It also wasn’t surprising. Perhaps you’re one of those who sees Kentucky on the front of the other team’s jersey and assumes the only time they should be physically dominating you is when John Calipari is on the sideline and the ball is round and orange. That’s on you.

This is what Mark Stoops does. He’s been there for ten years now. He’s taken a program that won two games the year before he got there, two games his first year and made it into a regular bowl team and currently the third-best program in the SEC East. The Wildcats have now beaten Missouri six times in seven seasons.

“Coach (Mark) Stoops has been there for 10 years,” Eli Drinkwitz said earlier this week. “Ten years. Recruited at a really high level and developed his players. So, to try to make a comparison, us and them right now, I think is a little bit soon.”

You can be upset that it’s happened, but it’s not hard to see why it has. In the last five recruiting classes, Kentucky has signed 22 four-stars and a five-star (and that doesn’t include Levis or Robinson or Dare Rosenthal, who transferred to Lexington this year from other Power Five programs). In that same time frame, Missouri has signed nine four-stars and five of them are true freshmen. The Tigers have lines anchored on both sides by players who returned for a bonus year of eligibility, which means they did so because they weren’t going to be NFL players. If you’re going to win important things in this league, you need NFL players on the lines.

Missouri was at a talent deficit in this game. Like it or not, it’s undeniable. That gap can be made up. The way Drinkwitz is recruiting is a good start on doing so. But they aren’t there yet and probably won’t be for at least another year or two.

“I don’t look at it as this is where Kentucky’s program versus Missouri’s program is,” Drinkwitz said on Tuesday. “I think that’s making it probably a little bit too big.”

In a year or two, maybe it won’t be. But right now, Missouri’s going to fall short in that comparison. Just as it did on Saturday night.

Sign up today and get all the news with a premium subscription. 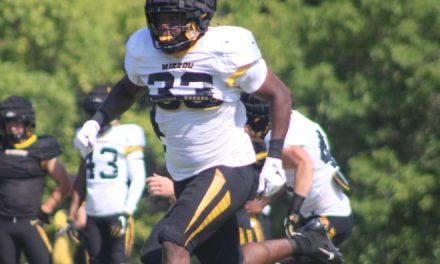