Missouri added another talented offensive weapon to its 2023 recruiting class on Thursday with the commitment of Destrehan (La.) wide receiver Daniel Blood.

The three-star prospect had been committed to Louisiana since the summer, but broke away from his pledge to the Ragin’ Cajuns on October 30th before announcing his commitment to Missouri on Thanksgiving afternoon.

Missouri has been showing interest in Blood for a while. The 6-foot, 175-pound prospect was on campus unofficially during the summer before picking an offer from the Tigers on September 29th.

“He’s a well established coach with a resume that speaks for itself,” Blood said of Peeler. “He’s also a very down to earth person. He thinks I really fit their system and that I’m an SEC caliber player. He likes the way I explode off the ball, my route running, and my punt returning skills. And that I’m a multi-sport athlete as well.”

So far this season, Blood has been a big playmaker for his Destrahan team, who are currently in the midst of a playoff run. During the regular season, Blood hauled in 20 catches for 441 yards and 10 touchdowns while also scoring five touchdowns on punt returns.

He also plays basketball and was a triple-jump state qualifier during his junior year.

With Blood in the fold, Missouri now has 14 total commitments in the 2023 recruiting class. The Louisiana native also becomes the third wide receiver pledge for the Tigers, joining Lee’s Summit (Mo.) product Joshua Manning and Marquis Johnson out of Dickinson (Tex.).

Cayden Green: “This was probably my favorite official visit” 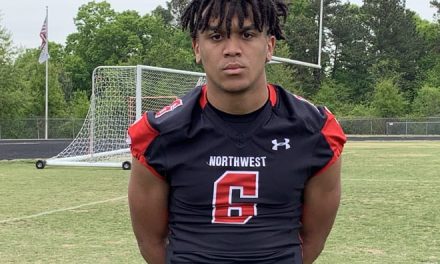