Every week PowerMizzou.com will hand out a position-by-position report card from Missouri’s most recent game. Here are the grades for the Tigers from Thursday’s 52-24 win over Louisiana Tech.

Quarterbacks: In his first home start, Brady Cook looked pretty poised. He didn’t play a perfect game but he managed the game well and spread the ball to eight receivers. Cook finished the game 17 of 26 for 196 yards and an interception. He also rushed seven times for 61 yards and a touchdown. He looked good on his 20-yard scamper for a touchdown and showed he has an awareness of pocket presence and the ability to create with his legs if he needs to. He did throw behind his receivers a couple times and read some of his reads a bit late. His lone turnover was partially because he threw the ball too hard on a drag route to Luther Burden III. GRADE: B

Running backs: They produced over 320 rushing yards and six touchdowns. The run game was on full display on Thursday. Now, there was a question as to who would start at running back and who would be the bell cow for this team and it was predominantly Cody Schrader and Nathaniel Peat who carried the load and made the most impact. Schrader got the start and had 17 carries for 70 yards and a touchdown. Peat seemed to be the best running back on the field with 72 yards on eight carries and a touchdown. He looked spry and elusive so his “soft tissue” injury that he had during camp is clearly behind him. GRADE: A 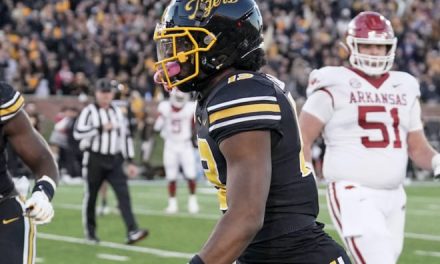