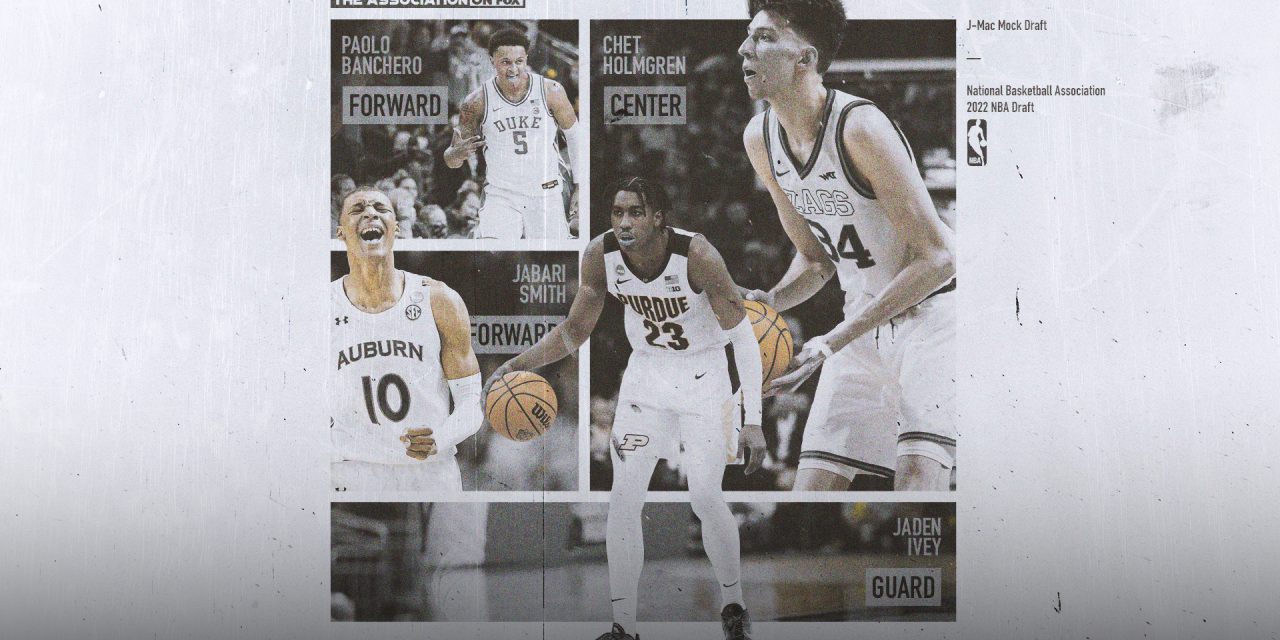 , Outside of the top six, the 2022 NBA Draft is a toss-up. Jason McIntyre breaks down his final mock before the real deal on Thursday.,

For a month, the top three picks have been locked into place, but after that, chaos reigns. Here’s our final mock draft, with no changes in the top six from Mock Draft 2.0.

When I wrote about Smith going first after the Magic won the lottery, he was +100. He’s now sitting at -154 to be the first pick. I have maintained that I’d take Paolo Banchero first overall, as his relentless motor is always on display and he’s more diverse offensively. But the Magic are going to ride measurables and Smith’s 3-point shooting and grab him first.

There are a few scenarios in which Holmgren slides out of this spot and the Thunder shock the world by grabbing Purdue’s Jaden Ivey. You could compare Ivey’s athletic ability to that of Russell Westbrook, another guard taken by Sam Presti back in 2008. Holmgren is -150 to be taken second; Ivey is +2200, so it would be a massive upset. Holmgren gives OKC a strong, young trio alongside Shai Gilgeous-Alexander and Josh Giddey.

Houston’s trade of Christian Wood last week cleared room for the Rockets to start Alperen Sengun and Banchero up front. Houston will not be very good defensively, but between those two and Jalen Green, there won’t be a team in the NBA with three more talented players under the age of 21.

Not only is Murray a better overall offensive player than Jaden Ivey — the Iowa star had the highest offensive rating of any player in college basketball last year, per Ken Pomeroy, a metric topped by Zion Williamson in 2019 and Damian Lillard in 2012 — but he is also vastly superior at the defensive end. Murray ranked fifth in the Big Ten in block percentage and was 18th in the conference in steal percentage. Ivey ranked outside the top 30 in both.

The Kings ranked 27th in defensive efficiency last season. Harrison Barnes is under contract for one more year, and then Murray can be the team’s small forward for a decade.

Dare to dream, Pistons fans: Cade Cunningham, Saddiq Bey and Mathurin could grow into a version of Boston’s Tatum–Brown–Smart. One reason I give an edge to Mathurin over Ivey is his ability to move without the ball and score off the ball.

This is a home run in terms of a regional fit for the Pacers. It’s possible that in three years Ivey is the best player from this draft, as he’ll have room to operate in the NBA instead of having the paint clogged with bigs as it was in the Big Ten. Ivey could be destined to be a star on mediocre teams, as he dominates the ball offensively.

The Blazers are a mysterious team because they want to trade the pick to grab a veteran, but should they? It’s not like Portland is one wing or big away from being a playoff team in the loaded West. As for Williams, if you watched Boston’s Robert Williams III in the NBA playoffs, why can’t that be Mark Williams in a couple of years?

Sharpe is the biggest boom-or-bust prospect in the draft. He didn’t play a second of college basketball, and now he’s going top 10 based on high school tape? The Pelicans, after catching a break getting into the playoffs (Paul George COVID) and pushing the Suns to six games (Devin Booker injury), are feeling like a jolt of Zion will push them into top-four contention next year. And Sharpe is a wild card — the type of player who pops in two years to put them over the top.

Over the past few weeks, Daniels has emerged as the best G League player in this draft. The Australian-born wing sneaks into the top 10 to play for a team that has had a good run of undervalued Australians (Patty Mills, Jakob Poeltl). If you squint, can you see Boston’s Jaylen Brown?

I remain high on the tireless forward who was a high school star in Seattle, first playing for coach Brandon Roy, then playing alongside Jaden McDaniels (currently of the Timberwolves). The advanced defensive stats for Eason at LSU last season are among the best of any first-round prospect, and his 80% efficiency from the line possibly portends great things to come as he shoots more 3-pointers. He’s low on mock drafts only because he already turned 21.

The Knicks aren’t going to get an immediate impact player here, and the Kyrie Irving stuff is a pipe dream, so they’re trying to deal this pick — good luck. They’ve got to grab the best player on the board, and even though Davis was injured late in the season and struggled in the NCAA Tournament, he had nine games of 25-plus points last season en route to being an All-American. He’s a great culture guy for a franchise that has won one playoff series this century.

Can you draft a player this high who is only a defensive force and extremely limited offensively? Herb Jones went in the second round and was an impact player for the Pelicans. Sochan is much younger (only 19), but his 58% free-throw shooting is worrisome. I see bizarro Kyle Kuzma, down to the wacky hair.

The Hornets are caught firmly in the middle: not good enough to win a round in the playoffs and always on the back end of the lottery. Duren is the youngest player in the draft, and with the right coaching and dedication, he could be a Zach Randolph-type force. For now, Charlotte would settle for some interior defense.

The Cavs have three front-court players locked in: Evan Mobley, Jarrett Allen and Lauri Markkanen. It’s possible they try to package Collin Sexton and Kevin Love‘s expiring contract to land an All-Star, but for now, we’ll pencil in the 6-foot-10, 19-year-old French prospect to take Love’s spot on the roster as LeBron’s former teammate goes to a contender.

Once a superstar recruit on the top-five track, Griffin suffered injuries in his final two seasons of high school, and his prospects dimmed a bit. He could go anywhere from seventh to 20, depending on what medical staffs think. The 44% 3-point shooting should keep him in the top 20. Griffin isn’t even 19 years old, so he could be undervalued a bit.

The oldest player with a chance to crack the lottery is the 22-year-old Agbaji, the Kansas sharpshooter who hit six 3s in the Final Four against Villanova. He had five games with at least five 3-pointers this season.

As recently as January, Branham wasn’t a candidate to enter the draft; by March, he was the Buckeyes’ best player. A smooth wing guard, he seems to only be scratching the surface as a scorer (49/41/83 shooting splits). It wouldn’t be a surprise if he landed just outside the top 10.

Hardy’s stock has dipped a bit from a year ago, when he was considered a top-five pick after a monster junior season in high school (30 PPG) followed by a McDonald’s All-American game selection. Still, he’s just 19. Being dinged for competing — while a player such as Shaedon Sharpe benefits from not playing — seems silly. Hardy put up 17 PPG in the G League but shot only 35% from the field and 26% from deep.

Like Branham, Wesley is a big (6-foot-5) scoring guard who can score at all three levels and has evolved from an early second-round prospect to one who might just land outside the lottery.

The Spurs are loaded with wings, and their only bigs are Jokob Poeltl and Zach Collins. Jovic is at least a year away from being a factor, but at 6-foot-11, he’s the smooth type of European the Spurs historically have loved.

Washington doesn’t quite fall into the “undervalued Kentucky guard” bucket like Jamal Murray and Devin Booker. But Washington deferred plenty in Lexington, and we haven’t seen the kid who was a dynamic high school point guard and one of the best players in the country.

Given the injury history of Ja Morant and the likelihood of Tyus Jones leaving in free agency, the Grizzlies might draft a point guard. Chandler is a tenacious defender, and his assist rate was fifth in the SEC.

I’m not sure why I’m so enamored with two Arizona wings in this draft, but here we are. Terry is the 3-and-D wing the 76ers thought they were getting in Matisse Thybulle. He was expected to take a huge step for the Wildcats next year and perhaps be an All-American, but the NBA is high on his skill set, so he made the leap.

Houstan is an elite high school recruit who had a quiet season on a veteran Michigan team, but he’s a young 19. I could see him trying to play some small-ball 5, as he’s long defensively and can space the floor (35% on 3-pointers). Strangely, he didn’t attend the NBA Combine, so where he’ll go in the draft is something of a mystery.

Toiling in relative obscurity in the WCC with the Broncos, Williams has crushed the draft process, starting with his 7-foot-2 wingspan. He projects as a potentially elite defender and is an above-average passer (18 points, 10 rebounds vs. Saint Mary’s). He also shot 39% on 3-pointers.

The 7-foot-1 center is a defensive menace. Kessler led the country in block shot percentage and shot 70% from the field. Twenty years ago, he’s a top-10 pick, but now? It’s tough to see where he fits, given the lack of perimeter shooting. He’s a liability at the foul line, too (59%).

When you watched Grant Williams come off the bench for the Celtics in the playoffs, you could envision that role as the best-case scenario for the 6-foot-7 Liddell.

If the Warriors can’t afford to keep Kevon Looney, they’ll need a backup for James Wiseman, who can’t seem to stay healthy. Williams was a surprise draft entrant and could sneak into the first round. At 6-foot-10, 240 pounds, he’s long and a very good defender — he led the SEC in charges taken — and if you roll the tape against Gonzaga, he held his own against Drew Timme and Chet Holmgren, going for 15 points, 12 rebounds and three assists, including a clutch late 3-pointer.

Beauchamp attended four different high schools, then dominated community college ball (30 PPG, 10 RPG) before jumping to the G League, where he averaged 15 PPG. Of concern is his 24% 3-point shooting. He’s at least a year away from contributing in the NBA, but the deep Grizzlies can afford that.

NBA odds: How a sharp is betting on the 2022 NBA Draft

Carpenter breaks down his game-winning at-bat against Cubs,