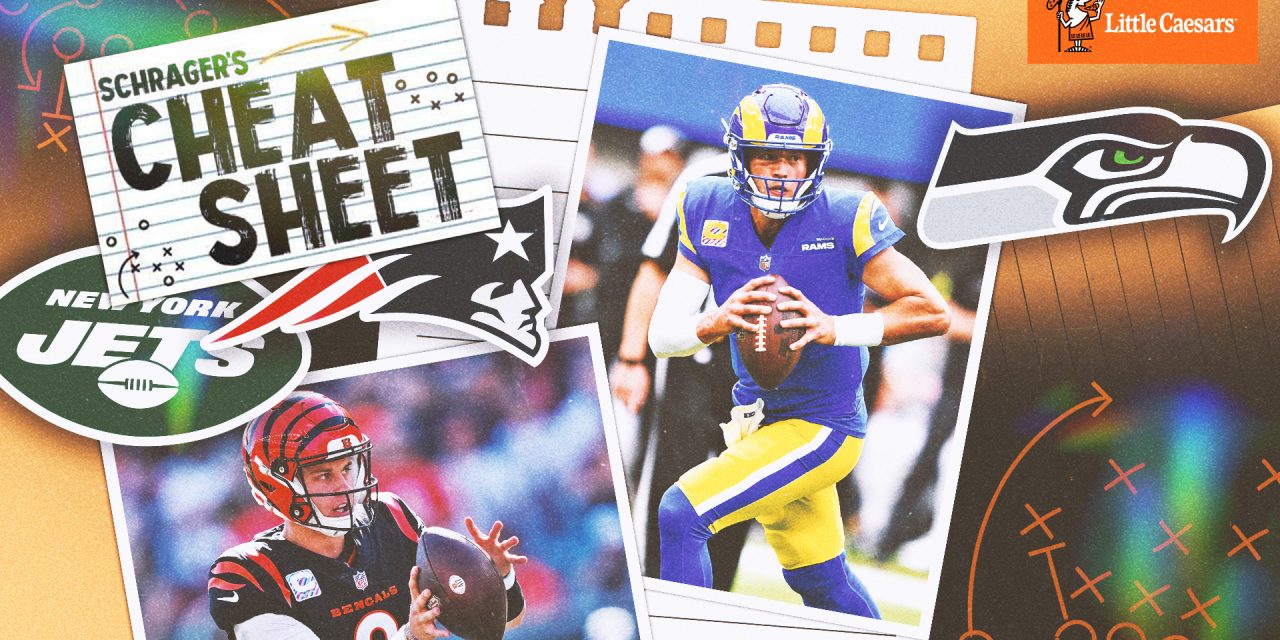 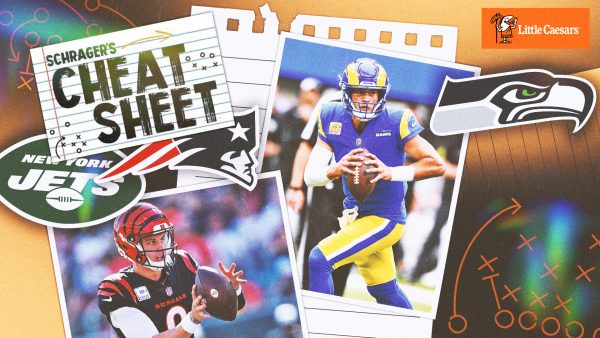 , The Rams and Bengals both got off to poor starts, but last season’s Super Bowl teams might be getting right at the right time, Peter Schrager writes.,

The Super Bowl hangover might have lingered deep into the fall for both the Rams and Bengals. However, as Halloween approaches, both clubs have reasons to be optimistic.

Let’s catch up with the defending AFC and NFC champions and more in this week’s Cheat Sheet.

If you thought the Rams’ building was all doom and gloom coming out of the bye week, you’d be wrong. There’s relief on the way, and it’s coming at the most important time possible.

On Sunday, when the Super Bowl champs face a 49ers defensive front that has given them nightmares for most of the Sean McVay era (4:25 p.m. ET on FOX and the FOX Sports App), Los Angeles is banking on the return of center Brian Allen to the lineup.

Andrew Whitworth talks about what he thinks the Rams’ biggest issues are, and whether they can battle back.

Since Allen left with an injury in the Week 1 loss to Buffalo, Matthew Stafford‘s front five hasn’t been consistent, and it hasn’t been good.

The rotating door at center has been especially harrowing. In Allen’s absence, the Rams have used Coleman Shelton, Jeremiah Kolone and Matt Skura at the center position. Shelton, too, was lost to injury.

Allen comes back this week, and so does Van Jefferson, the talented wide receiver who made play after play in the Super Bowl, only to rush to the hospital to see his newborn child. He hasn’t been on the field since and, gosh, do the Rams miss him.

I’ve spoken to McVay plenty over the last few weeks, and there’s no great feeling of despair or hovering cloud of disarray. His office has a saying plastered on the wall that reads “Urgent Enjoyment.” Interpret that however you want, but a win Sunday against the hated 49ers would go a long way to bring some light into that facility.

McVay, whose office is littered with leadership books and coaching biographies (he’s a huge John Wooden guy), was upbeat and excited to dig into the 49ers film this week when I spoke to him over the bye. He knows San Francisco has had L.A.’s number and that the Rams fell just short of landing Christian McCaffery. But he also knows the game is at home, the Rams are rested, and San Francisco isn’t coming in as some sort of house on fire right now, either.

The FOX NFL Sunday crew breaks down whether several 3-3 teams can make the playoffs this season.

And there’s no need for the sixth-year coach and his team to be feeling listless. The NFC — outside of the undefeated Eagles — is still very much wide-open. And on the same weekend that Tom Brady looked pedestrian in Carolina, Aaron Rodgers looked less than ideal in Washington and the 49ers couldn’t keep up with Kansas City, McVay’s guys were home, seeing the dominoes fall.

If I told you before the season that Brian Allen and Van Jefferson would be two of the most important pieces to the Rams’ Super Bowl return, you’d say I was way off.

And yet, here we are.

2. Here come the Bengals and their QB

The other Super Bowl team from last season looks a lot better than L.A. right now. Heck, the Bengals look as good as any team in the league.

After falling to 0-2 and surrendering 13 sacks in the first two weeks after an offseason spending spree to rebuild the offensive line, Cincinnati was written off by a lot of pundits. Coach Zac Taylor was even feeling heat, as if 2021 just never happened.

Why Joe Burrow is now a Tier 1 QB

Colin Cowherd explains why it is time to label Joe Burrow as a Tier 1 QB.

Over the last five quarters, Joe Burrow has thrown for 597 yards and four TDs, and has the Bengals offense humming like it was down the stretch of their miracle Super Bowl run a year ago.

Since Week 3, Burrow is averaging 312 passing yards per game, completing 71.3% of his passes, and has tossed 12 touchdowns and just one interception. That ranks in the top three in all statistical categories for quarterbacks who have played in at least three games.

In an MVP conversation featuring Josh Allen, Patrick Mahomes and maybe (maybe?) Jalen Hurts, Burrow has nudged his way back in. There’s no quarterback throwing the ball better at the moment.

In fact, the third-year QB is so dialed in, his longtime college and pro teammate Ja’Marr Chase insisted the 32-yard touchdown strike that he caught last Sunday was the top connection they’ve ever had, going all the way back to LSU.

“That was definitely the best pass he’s ever thrown,” Chase told Geoff Hobson of Bengals.com. “That was a dime, bro, a dime.”

“We just executed early on”

Joe Burrow talks with Jen Hale about the Bengals’ dominating win over Atlanta and why the offense was so effective.

Cincinnati faces Cleveland on Monday night and though the Browns have given the Bengals fits in recent years, there’s no reason to believe Burrow will slow down anytime soon.

Six weeks after being the team everyone wrote off just two weeks into its defense of the AFC title, the Bengals are 4-3 and their third-year quarterback is slinging the ball as well as ever. Maybe, just maybe, the offensive line needed a few games to gel.

Maybe, just maybe, going up against TJ Watt and Micah Parsons in the first two weeks wasn’t the easiest assignment.

Maybe, just maybe, an emergency appendectomy in August wasn’t just some scratch of the pinkie finger.

Who cares now? It appears the Bengals are back, and their QB is still very much that dude.

3. The Patriots’ dominance over the Jets

As odd as it might look on paper, the 3-4 Patriots are favored over the 5-2 Jets in New Jersey this weekend.

There’s a reason for that. New England has long owned the Jets. That’s home. That’s away. That’s wherever.

New England has won 12 straight over the Jets, including six straight in New Jersey, and the looming history of Belichick and the Jets creeps in every time the two teams take the field, regardless of who is under center. For either team.

In those 12 games, the Patriots have a demoralizing +245 point differential over Gang Green. If you want to find the last time the Jets beat the Patriots in regulation in a regular-season game, you have to go all the way back to Sept. 19, 2010.

Mark Sanchez, now one of our seasoned analysts in the FOX booth, was a second-year player. The last touchdown thrown in that game was to Dustin Keller, who hasn’t played in an NFL game since 2013.

With no Breece Hall or Alijah Vera-Tucker for the remainder of the season, there’s a looming feel of doom and gloom among Jets fans this week. One line I’ve heard time and time again on sports talk radio in New York is, “Why can’t we (always ‘we’) have nice things?”

With a loss to the Patriots on Sunday, there’s a chance all the optimism and all the hope around this 2022 Jets season will be sucked out of the air completely.

But a win? A win truly marks a new era. One in which the sky isn’t always gray, and Belichick isn’t always the boss.

The Jets have arguably the best rookie cornerback to enter the NFL in the last decade in Ahmad “Sauce” Gardner. The AFC’s Defensive Player of the Week from Week 7 has been a lockdown guy since the second he stepped on the field for Gang Green in Week 1.

The second-best rookie corner might very well be his college teammate, the Seattle Seahawks‘ Coby Bryant. Whereas Gardner was the fourth overall selection in April, Bryant slipped all the way to the fourth round.

In a matter of seven weeks, both have emerged as bona fide NFL starters. The two first-year NFL studs were best buds at the University of Cincinnati. And though “Sauce” got all the pre-draft accolades, it was actually Bryant — not Gardner — who won the Jim Thorpe Trophy, given annually to the best cornerback in college football.

I loved Bryant’s game at Cincinnati, watched him excel in the Notre Dame game and kept a close eye on the upstart Bearcats throughout their dream 2021 season. Bryant had three interceptions and took one back 74 yards to the house for a score.

In Indianapolis in February, I made it a point to get my little iPhone recorder out when Bryant was speaking with reporters at the NFL Scouting Combine media availability session. Someone asked him about the Mamba Mentality (yes, his real name is Coby Bryant). Bryant, whose brother, Christian, played in the league, as well, answered:

“This is the mentality I was born with. My dad has it, my brother [former NFL safety Christian Bryant] has it. It’s in the family. We’re hungry. It doesn’t matter what we do. We always take everything serious. It’s a reason behind why we do everything.”

When we had Bryant on “Good Morning Football” back in April, he continuously referred to “Sauce” Gardner as Ahmad. The nickname that has led to a million New York Post headlines and even a gold hot-sauce piece of jewelry at the draft didn’t have much of an effect on his college teammate. That was just Ahmad, the same guy he’d been lining up with in college practices and games for months and months.

What a treat to see Kevin White trending on Twitter last Thursday night.

In the middle of the first half in a back-and-forth affair between the Cardinals and Saints, New Orleans wideout Kevin White hauled in an Andy Dalton pass and scampered 54 yards to set up an eventual touchdown.

The catch was just the second reception for White since 2018 and marked the longest gain of his career. White, if you recall, was drafted seventh overall in the 2016 NFL Draft in Chicago by the hometown Bears.

The crowd reception to his selection was epic, and after a 19-catch rookie season, he was expected to have a big sophomore season in the Windy City. White would go on to catch just seven more passes over the next five seasons, including stops in Arizona, San Francisco and multiple trips on the transaction wire for the Saints.

But there he was Thursday night, back in the NFL, and making arguably the biggest play of his NFL career. I got so excited when White made the catch that I fired some boring tweet along the lines of “Kevin White! Yes!”

I then checked Twitter, and saw about 240 other NFL media people made the same exact tweet within seconds of my pressing send. White’s story is one we love: Top draft pick fights injuries, is written off and forgotten, never loses faith in himself and has that shining moment, perhaps far long after even his biggest supporters were keeping tabs on him.

What a pleasant surprise White’s big play was. Here’s to plenty more, for years to come.

And, yes, I picked him up on my fantasy team earlier this week. I don’t think I’ve ever wanted a waiver wire pickup to produce more.

Peter Schrager is an NFL writer for FOX Sports and a host of “Good Morning Football” on NFL Network.

in this topic
Peter Schrager

The Jaguars have lost 4 straight. They still believe in their own potential 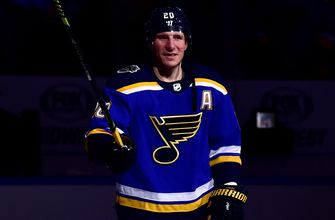 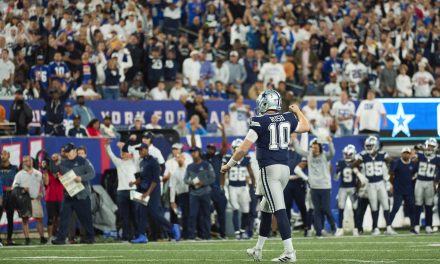 Cooper Rush has kept Cowboys afloat — with a new offense. Should they keep it? 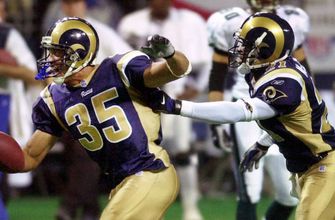 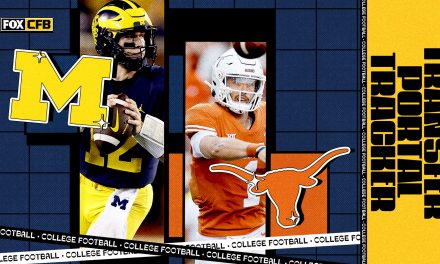