Resetting the Mizzou hoops transfer situation at May 1 deadline

In the nationwide game of musical chairs that the college basketball transfer portal has become, the music just stopped.

Saturday represented the final day for players to enter the portal without having to sit out a season at their new destination. Thus, after a two-month span that saw nine of Missouri’s 12 scholarship players from last season enter the transfer portal and five newcomers transfer in to replace them (so far), we now have some clarity as to who will be staying and who the candidates are to fill the team’s two remaining scholarships. (Although it could take a couple days for last-minute portal entrees to be reported.)

The first takeaways is that we can now say with confidence that Missouri will have three returning players on next season’s roster: forward Kobe Brown, his brother, Kaleb Brown, and Ronnie DeGray. This will mark the second season in a row that the Tiger roster features just three returners, one of whom played sparingly the prior season.

While we don’t yet know which two players will join those three as well as the eight others who have signed or committed with to Missouri since Dennis Gates was hired, we at least know the new additions will come from those players who have already entered the portal. We run down the top candidates below, as well as break down the departures and additions that have come through the transfer portal so far this offseason.

Trevon Brazile: The Springfield, Missouri native entered the transfer portal between Missouri’s firing of Martin and hiring of Gates, and Gates couldn’t get him back on board. Brazile committed to Arkansas on March 30, making him the lone transfer portal departure from last season’s roster to wind up at a high-major school. Brazile missed the first eight games of last season due to a health scare but wound up starting 23 contests and flashed impressive athleticism and versatility. He averaged 6.6 points, 5.1 rebounds and 1.9 blocks in 21.5 minutes per game. He will face his former team twice next season.

Anton Brookshire: Another Springfield product, Brookshire played sparingly at the start of last season, then missed the final 15 contests due to a wrist injury. Brookshire saw just under nine minutes of action per game when he suited up, averaging 1.5 points, 0.8 assists and 0.9 turnovers. He has not yet announced a destination.

Boogie Coleman: Coleman’s arrival from Ball State was met with excitement from both Missouri fans and the former coaching staff. A combo guard who averaged 13.8 points per game during his second season at Ball State, Cuonzo Martin tried to make Coleman into the Tigers’ primary point guard. The experiment did not go well. Coleman averaged 8.6 points, 2.8 assists and 2.7 turnovers per game. He scored in double figures just two times in Missouri’s final 11 games. Coleman entered the transfer portal on April 22 and has not yet announced a destination.

Amari Davis: Davis, too, put up big numbers at a mid-major school but struggled to replicate his success at Missouri. Davis averaged 16.5 points per game across two seasons at Green Bay. That average dipped to 9.0 points during his lone season as a Tiger. Davis, who thrived as a mid-range shooter, was capable of hot scoring stretches, like when he scored 23 points on 10-10 shooting at Ole Miss, but he also had 10 games in which he scored five points or fewer.

Sean Durugordon: Durugordon actually entered the transfer portal midway through last season, long before Martin’s departure. The athletic wing enrolled at Missouri in January of 2021 and redshirted the second half of the 2021-22 campaign. Even after the roster turned over, he never found a consistent role, averaging 5.5 minutes in 12 games before entering the portal.

DaJuan Gordon: Gordon started all 32 games in which he played last season after transferring to Missouri from Kansas State. He served as perhaps the team’s best perimeter defender and led the Tigers in three-point shooting at 36.4 percent, but he struggled as a ball-handler. He will play at New Mexico State next season.

Yaya Keita: The big man out of De Smet suffered his second significant knee injury in as many years at Vanderbilt on Feb. 8. The injury ended his season. Prior to that, Keita was playing just 6.8 minutes per game and averaged 1.2 points and 1.2 rebounds.

Javon Pickett: The lone fourth-year player on last year’s roster, Pickett also served as Missouri’s most consistent offensive threat. He scored in double figures in 16 of the 18 SEC games during which he played. On the season, he averaged a career-high 11.1 points to go along with 3.1 rebounds and 1.9 assists. Pickett will play his final season at Saint Louis.

Jordan Wilmore: The 7-foot-3 colossus started six games early in the season for Missouri, and he scored 11 points in a win over Northern Illinois. But he quickly fell out of the rotation, then a back injury sidelined him for the rest of the season after Jan. 12. Wilmore will transfer to Northwestern State.

Noah Carter: Carter is an intriguing prospect. The 6-foot-6 forward put up impressive numbers at Northern Iowa, averaging 15.0 points and 4.1 rebounds per game last season. He picked the Tigers over Florida, Marquette and Virginia Tech. But he also spent most of his time playing the five spot for Northern Iowa, so it seems fair to wonder how his game will translate to the bigger, more physical SEC. After he committed to Missouri, Carter told PowerMizzou that he can play any position.

DeAndre Gholston: The first player to transfer to Missouri after Gates was named head coach, Gholston averaged 15.3 points per game across two seasons at Milwaukee. Gates got a close look at him while he was the coach at Cleveland State, as the two faced each other five times. Gholson was a volume shooter at Milwaukee, averaging 13.8 field goal attempts per game last season. He did shoot 34.2 percent from three-point range across the past two years, which the Tigers will welcome. He has two years of eligibility remaining.

Tre Gomillion: One of two players to follow Gates from Cleveland State to Missouri, Gomillion looks to be a similar player to Pickett. He may not have the flashiest game or the best numbers, but he can do a bit of everything. Gomillion averaged 10.9 points, 4.7 rebounds, 2.9 assists and 1.2 steals per game last season. He made the Horizon League all-defense team two seasons in a row. The upcoming season will be Gomillion’s last.

D’Moi Hodge: Hodge, too, followed his head coach to Missouri, but his arrival likely excited fans more than Gomillion’s. Hodge led Cleveland State in scoring with 15.4 points per game last season. He also earned Horizon League defensive player of the year honors. It wouldn’t come as a shock if Hodge leads Missouri in scoring next season. He, too, has one year remaining.

Nick Honor: Gates bolstered the point guard position, Missouri’s primary weakness a season ago, with Honor. Honor brings high-major experience, having started 35 games across the past two seasons at Clemson. His offensive numbers might not be the most flashy — he averaged 7.7 points and 2.4 assists per game a year ago — but he logged an assist-to-turnover rate of better than 2:1. He will have two college seasons left if he wants them.=

Note: This may not be a comprehensive list of possible additions. News of Missouri interest in some of the players who entered the portal in the past few days will likely continue to trickle out.

Jamarion Sharp, Western Kentucky: Sharp is the most noteworthy last-minute portal entry for Missouri fans. The 7-foot-5 forward entered the portal Friday. He played for new assistant coach Kyle Smithpeters at John A. Logan CC before his lone season at Western Kentucky. Rumors of Sharp to Mizzou have swirled for weeks, and Gates has said publicly that he wants to add a rim protector to the roster, so this certainly bears watching. Sharp, who led the nation in blocked shots with 4.6 per game a season ago.

Isiaih Mosley, Missouri State: After a dominant sophomore season at Missouri State, the Columbia native has both entered the transfer portal and declared for the NBA Draft. While Missouri hasn’t been publicly linked to Mosley, we have to imagine Gates and company will try to land him if he does opt to return to college for another season. The Rock Bridge product averaged 20.4 points and 6.2 rebounds per game last season while shooting 50.4 percent from the field, 42.7 percent from three-point range and 90.2 percent from the free throw line. Kansas, which features another Rock Bridge product in point guard DaJuan Harris, has also been rumored to be a contender to land Mosley.

Souley Boum, UTEP: Missouri was among the long list of schools that reached out to Boum after he entered the transfer portal, but no other chatter about the Tigers being involved in his recruitment has surfaced since, so it seems likely Boum is headed elsewhere. The 6-foot-3 guard averaged 19.8 points per game for UTEP last season. 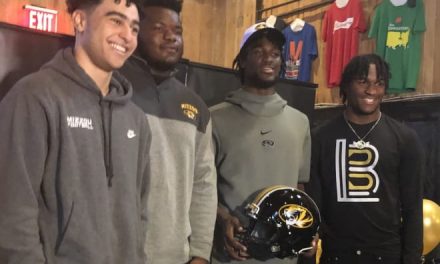 St. Louis quartet hopes to set a trend in the city

Peat betting on himself in return to Columbia