1) Missouri easily won a game Saturday that it should easily have won. You can read my thoughts about that here. There wasn’t much more to say about it than it happened, Missouri won and it’s time to move on. That becomes easy to do for many reasons: It’s a short week (there are only five guaranteed days left in Mizzou’s football season). It’s a game you have to win to get to 6-6 to guarantee you get to keep playing. The opponent is your “rival” which is coming off a huge win to get to six wins itself and is now playing to guarantee its second consecutive winning record after a four-year stretch in which it went 11-35. If Arkansas wins on Friday, the Razorbacks can sell this season as a minor step back. Missouri has a chance to both spoil Arkansas’ season and “make” its own season on the same day. The Razorbacks opened as a 4.5-point favorite. The line is generally around four right now.

2) So about the bowl scenario, let’s take a look at it. At 6-6, the Tigers are going to be guaranteed a bowl spot. The SEC currently has ten teams that are bowl eligible. Vanderbilt, Mizzou and Auburn can all get there on Saturday. Vandy plays Tennessee and Auburn plays Alabama, so in all likelihood, those teams are going to finish 5-7. If Mizzou can pull the upset and get to 6-6, here’s the bowl picture in the league. We’re going to assume for the time being that UGA beats LSU in the SEC title game and the SEC gets just one team in the playoff.

Then we get to the Pool of Six Bowls. These are all assigned as a pool with input from the league. They are as follows: Texas, Las Vegas, Music City, Liberty, Reliaquest, Gator. If Missouri wins, there will be seven teams for those six bowls. Mizzou, Florida and Arkansas would likely be 6-6. Kentucky gets to 7-5 if it beats Louisville, South Carolina has already won 7, Mississippi State has won 7 and Ole Miss has won 8.

I’ve heard two bowls that have interest in Mizzou if the Tigers get to 6-6: Las Vegas and Liberty. The Liberty Bowl would likely be a matchup with Kansas. One would think that would be very appealing to the bowl game and would have some interest for the SEC as well. If I’m Missouri, I don’t want that game because there’s more downside to losing than upside to winning, but ultimately, I doubt they’d say no to it. The Las Vegas bowl is against a PAC 12 team. Those are probably the best-case scenarios. Worst-case is that Mizzou is (again) the team left out of the SEC bowls and then would be relegated to the Birmingham Bowl against an AAC team on December 27th which is just about the definition of “worst case.”

To ensure a pool of six game, Missouri should root for the following: Alabama to beat Auburn, Tennessee to beat Vanderbilt and LSU to upset Georgia in the SEC title game. If those things happen, it is likely LSU gets into the playoff, which moves Tennessee and Alabama up into the Sugar and Orange Bowls, LSU to the Citrus and leaves six teams for the pool of six.

TL;DNR: A 6-6 Missouri team would likely be bound for Memphis, Las Vegas or Birmingham. 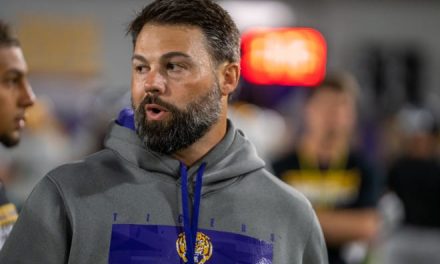 Drinkwitz’s staff shake-ups include new ‘No. 2’ on defense

WATCH: 2023 CBC back Jeremiyah Love a name you should know