For the first time since 2013, the Missouri Tigers played for an SEC championship as they faced the Arkansas Razorbacks in Gainesville, Fla. After three straight complete-game shutouts carried the Tigers into the championship game, pitching woes and silent bats drove them right out of it. Arkansas lived up to the billing as the tournament’s top seed in a 4-0 win.

Laurin Krings began the game for Missouri in the circle. Her shutout performance against Alabama in the quarterfinal received nationwide attention, but her efforts in the championship game weren’t as perfect. She gave up a run and three hits in the first and Larissa Anderson turned immediately to Megan Schumacher. Jordan Weber would eventually pitch for the third time in four days as well, but all three pitchers struggled to find their groove and the streak of defensive dominance came to a screeching halt on Saturday.

“Overall very proud of our team. Obviously a disappointing outcome, but we competed. We fought for what we believed in. We did what we came here to do: to get to that championship game,” Anderson said. “I couldn’t be more proud of the players and our staff for what we were able to do this week.”

The Razorbacks manufactured a run in the first inning as three of the first four batters got a hit off of Krings. Arkansas continued its offensive tear even after a pitching change that brought in Schumacher in the bottom of the second. Schumacher’s first batter sent a hard ground ball down the right field line that was called fair on the field stood as a triple following a Missouri challenge. Marlene Friedman sent a bloop single over Kendyll Bailey’s head to make it 2-0 Razorbacks at the end of two innings.

A leadoff walk for KB Sides in the bottom of the fifth proved costly as a single from Hannah McEwan brought her from first to third. Alex Honnold, in an attempt to throw Sides out at third, saw the ball take a hop into left field and allowed Sides to come home to make it 3-0 Arkansas. This soon prompted a second pitching change that brought in Weber with no outs and runners on the corners. Weber gave up a walk to load the bases, but then got back-to-back force outs at home. Weber almost escaped the inning with no damage but sent a wild pitch well over the head of catcher Hatti Moore to allow another run and end the inning at 4-0.

Weber pitched through the sixth inning without allowing another run, but the Tiger offense didn’t plate a run. The Razorbacks’ Chenise Delce threw her second complete game in two days. The championship loss for the Tigers is their second in two appearances since joining the conference in 2013.

“She flat out beat us,” Anderson said. “She’s got nasty movement and she has unbelievable control. We just never were able to get on time and square it up.”

Moving forward for the Tigers, their next big event is Selection Sunday tomorrow, which will decide whether or not Missouri will get the opportunity to host a regional tournament. At the start of the week, it looked as though hosting may be out of the picture. Three great performances in the SEC Tournament followed by the loss to Arkansas in the championship game may have turned the odds in Missouri’s favor.

“It’s going to be up to them to decide if we’ve earned enough and our resume is strong enough to be willing to host,” Anderson said. “I think we’ve put ourselves in the conversation. If not, we’re gonna give our best effort wherever we do, though. You know, the big thing is we’re going to be in the show, so anybody in the show has an opportunity.” 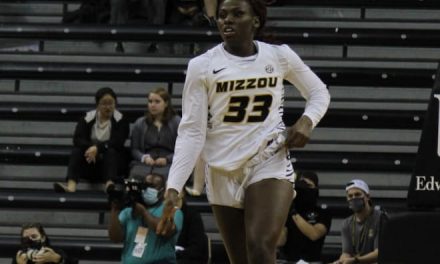