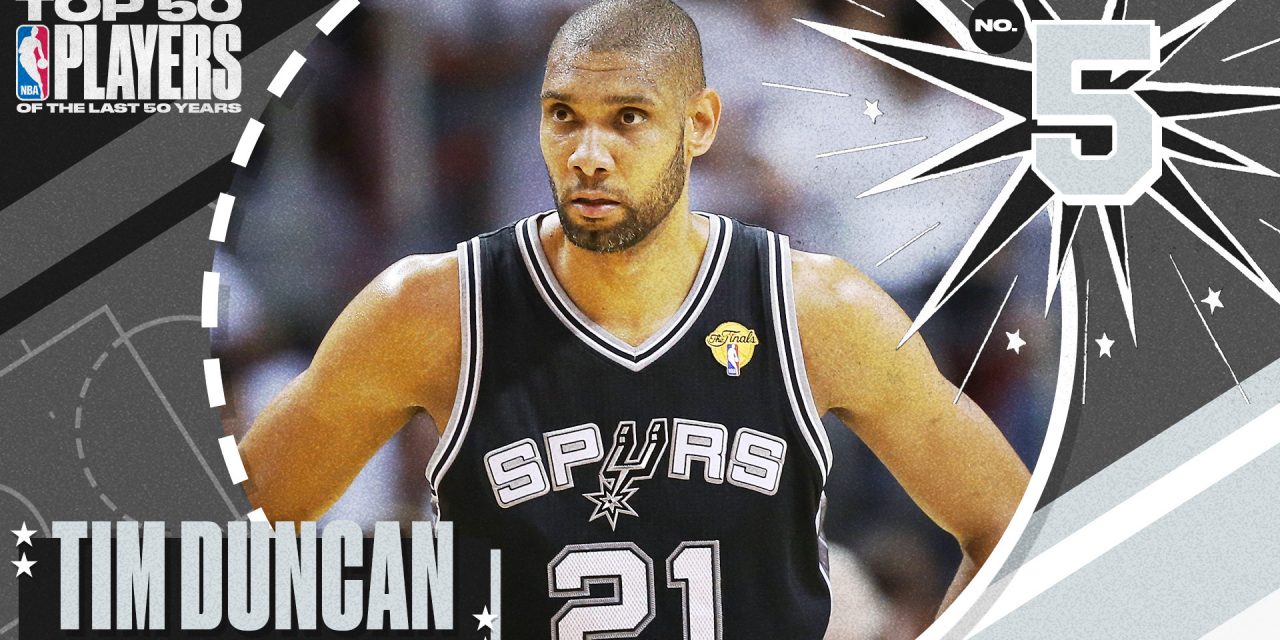 , Nick Wright’s countdown of the 50 greatest NBA players in the last 50 years continues, with Tim Duncan landing at No. 5.,

Editor’s Note: As part of a new series for his podcast, “What’s Wright with Nick Wright,” FOX Sports commentator Nick Wright is ranking the 50 best NBA players of the last 50 years. The countdown continues today with player No. 5, Tim Duncan.

A team’s ultimate goal each year is to win the championship. No NBA player has fronted more title contenders than Tim Duncan.

“The Big Fundamental” played 19 seasons, and his Spurs won at least 50 games in all but one of them. The exception, a 1998-99 lockout-shortened campaign consisting of just 50 games, ended with a second-year Duncan leading San Antonio to its first crown.

The Spurs were a top-three seed in the perennially stronger Western Conference 15 times during his career and won five rings 15 seasons apart, making for the longest-running NBA dynasty of the past 50 years.

“That is one of the main reasons I have Duncan five and Kobe [Bryant] six,” Wright said. “Kobe had that little gulf in the middle of his career. Duncan never had that.”

Dominant in the paint on both offense and defense, Duncan led the San Antonio Spurs to five championships over 19 seasons while collecting three NBA Finals MVPs along the way.

The top pick of the 1997 NBA Draft, in fact, was in his prime from Day 1, seamlessly pairing with David Robinson to spark a 36-win turnaround for Gregg Popovich’s Spurs. After winning Rookie of the Year and making the first of eight consecutive All-NBA first teams to begin his career, Duncan recorded 32 points and 10 rebounds in his playoff debut.

“It gets forgotten because it was a lockout year, first year without [Michael] Jordan,” Wright said. “That team kicked everybody’s ass.”

The Spurs’ repeat bid, however, was dashed when a late-season injury to Duncan sidelined him for the playoffs. They’d then fall to the Lakers, who were in the midst of a three-peat, two years in a row. For what it’s worth, Duncan averaged 29-17-5 in the 2002 meeting with L.A., proving to be the best player during the series while being awarded his first league MVP.

He was clearly the best player on the planet the following season. With San Antonio rebooting on the fly — Robinson was in his last year, while 20-year-old Tony Parker was in his second and Manu Ginóbili was a rookie — Duncan emerged into a captain, set several career highs and guided the Spurs to a No. 1 seed. For the second straight year, he led the league in win shares and won league MVP.

In the playoffs, he narrowly outproduced Shaq in an epic second-round showdown, posting 37 and 16 to clinch the series for the Spurs in six. Over the next two rounds, he put up a 40-15, two 30-20s, and a 21-20-10 with eight blocks to close out the Finals over the Nets. He averaged 25-15-5 with three blocks and 53% shooting for the postseason.

T.D. wasn’t quite as prodigious in 2003-04, but he had the Spurs vying to repeat when he made an improbable go-ahead jumper at the top of the key with less than a second remaining in Game 5 of another conference semifinals meeting with L.A. Derek Fisher then hit an even more miraculous shot to give the reloaded Lakers a series lead that they wouldn’t relinquish.

Duncan remained a top-five player yet looked like more than that in the 2005 postseason. Thanks to his marvelous two-way game, the Spurs relatively cruised through the Western Conference. In the Finals, he led all players in scoring and rebounding and dropped 25 and 11 in a tight, low-scoring Game 7 win over the defending-champion Pistons. That earned him his third Finals MVP.

“The angry Duncan years, the years coming off when he didn’t win the title, look out,” Wright said.

Why LeBron James and Tim Duncan are better than Kobe Bryant

After taking some recent fire by placing former San Antonio Spurs power forward Tim Duncan ahead of Kobe Bryant on his Top 50 NBA Players of the last 50 Years list, Nick Wright details why Tim Duncan and LeBron James are both better than Kobe Bryant.

He was no slouch in defeat, either. Duncan averaged a career-best 32.3 points in a seven-game series against the Mavericks. He went for 41 and 15 in Game 7, but an equally excellent Dirk Nowitzki got a bit more help from his supporting cast to advance. Sure enough, TD had the Spurs back in the Finals a year later.

After dialing it up in a memorable series with the Suns — Duncan averaged 27 and 14 — he deferred more than usual on offense in a sweep of the overmatched Cavaliers. Even so, Duncan led the Spurs in rebounds, assists, blocks and steals. Parker had the hot hand and topped San Antonio in scoring to garner MVP honors.

This fourth title also serves as a line of demarcation in TD’s career. Thus far, he’d averaged 24-13-4 with three blocks in the postseason and 22-12-3 with three blocks in the regular season, all while almost exclusively playing power forward and collecting nine top-five finishes in MVP voting. Upon turning 30, the 6-foot-11 Duncan transitioned to center and his playing time and output gradually diminished, although he remained comparably effective on a per-minute basis over the next eight years.

Between 2008-12, the Spurs reached two conference finals but also were eliminated in the first round twice.

In 2013, Duncan made first-team All-NBA for the 10th time. Amid a steady postseason run, he exploded for 30 points and 17 rebounds in Game 6 of the Finals versus the Heat. But he was bizarrely substituted for the final sequence of regulation, which included Ray Allen’s game-tying 3-pointer following an offensive rebound from Chris Bosh. Miami would win in overtime and then edge the Spurs in Game 7, despite Duncan’s 24 points, 12 rebounds and four steals.

“They lose the most heartbreaking championship game ever,” Wright said. “So how do they respond? They win the damn title the next year.”

At this point, the 37-year-old Duncan was still the top producer for an impressively balanced Spurs squad. He opened the Finals rematch with 21 and 10 and had a strong case for series MVP — it went to Kawhi Leonard — as San Antonio easily dispatched the Heat.

In a first-round thriller with the Clippers the following year, TD was objectively the Spurs’ top performer. That included scoring 10 points in the fourth quarter of Game 7, and the tying free throws in the final seconds, only to see Chris Paul knock down a jumper just before the buzzer. Duncan had 27 and 11 in the loss.

Not one to seek a farewell tour, he played one more season and didn’t announce his intentions to retire until after his last game. Duncan had played a whopping 251 of them in the postseason and nearly 1,400 in the regular season. He certainly made them count.

In the regular season, Duncan places fifth all-time in blocks, sixth in rebounds and 15th in points. Those rankings jump to first, third and sixth, respectively, in the playoffs. His 164 postseason double-doubles are a record.

Only LeBron James has made more All-NBA teams. Nobody comes close to Duncan’s 15 All-Defensive selections.

And the greatest power forward of all time.

in this topic
Nick Wright

Russell Westbrook and the Lakers: How we got here

Patrick Ewing vows to rebuild Georgetown: ‘I’m not a quitter’

Would Kevin Durant, Kyrie Irving be better off staying put in Brooklyn? 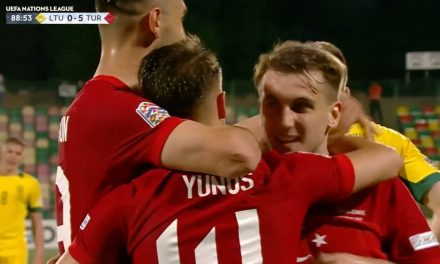 IBM Triples Number of Blockchain Patents in US Since Last Year 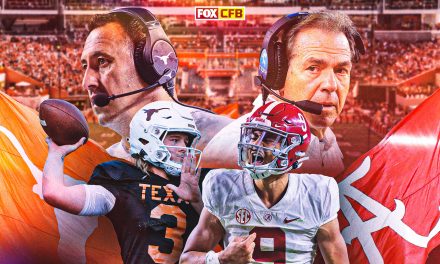