What’s next for Warriors’ core, Kyrie Irving, Deandre Ayton and others, 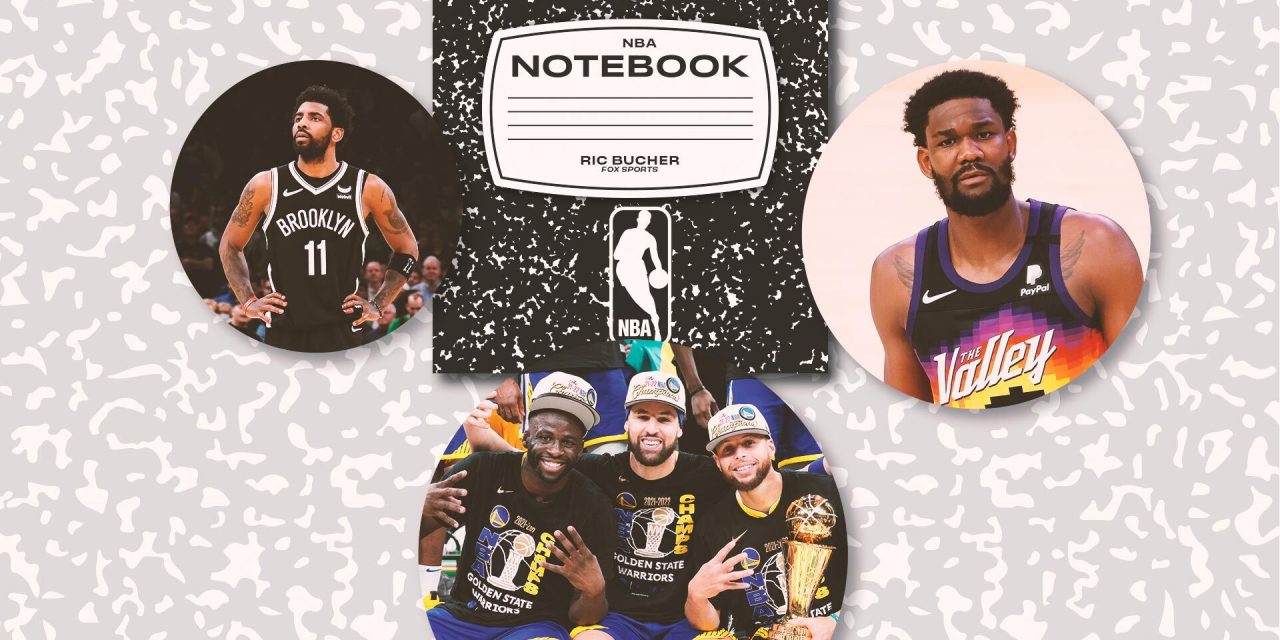 , Ric Bucher talks with NBA insiders about who helped and hurt their stock in the Finals and the best landing spots for Kyrie Irving and others.,

The NBA Finals do more than crown a champion. They also can transform how a player is perceived. This year no one did that, a sampling of rival scouts and executives revealed, more dramatically than the Golden State Warriors’ Andrew Wiggins.

“Andrew Wiggins showed me a level of significance in the Finals that I hadn’t seen from him before,” said one Eastern Conference GM. “He was their best defender. He rebounded the ball well. He didn’t disappear the way the old Andrew Wiggins would — and that was in the regular season. I was impressed.”

Wiggins entered the league in 2014 with high expectations as a No. 1 pick, dealt to the Minnesota Timberwolves on draft night in a three-team swap for three-time All-Star and two-time All-NBA selection Kevin Love. Yet, after making the All-Rookie first team, Wiggins didn’t garner another token of league recognition his next four-and-a-half seasons in Minnesota. He was only 24 years old when the Warriors acquired him midway through the 2019-20 season, and at the time he was perceived as a massive underachiever whose career had flatlined.

“It almost felt like Wiggins had been banished from the league,” said one Eastern Conference scout. “He was such a loser.”

Andrew Wiggins vs. the NBA

Colin Cowherd plays “Wiggins or Wigg-out,” in which he decides which players he would take over Andrew Wiggins between Rudy Gobert, Anthony Edwards, Kyrie Irving, Zion Williamson, Deandre Ayton and more.

Wiggins was selected an All-Star for the first time in his eight-year career this season, but even that could be attributed to a fortuitous set of circumstances rather than pure excellence. The Warriors’ strong start — 42-17, the second-best record in the Western Conference — warranted more than just leading scorer Steph Curry being recognized, and the Warriors’ two other established stars, Klay Thompson and Draymond Green, were largely missing due to injury through the first part of the season. It also helped greatly that Western Conference All-Star staples such as Paul George, Kawhi Leonard and Anthony Davis were all injured.

Wiggins’ status as a champion, though, was fully earned. He was the Warriors’ leading rebounder against the Boston Celtics, second in scoring and largely responsible for limiting Jayson Tatum to 36% shooting in the series, well below both his 45.3 regular-season percentage and 42.6 overall playoff percentage.

Perhaps the greatest testament to how Wiggins is now regarded is reflected by whom the Eastern Conference GM said the Warriors have to prioritize keeping as part of their core between Wiggins, Thompson and Green.

“You’ve got to keep Wiggins,” he said.

“He assumed the leadership mantle,” a Western Conference scout said. “He was a vet who showed he still had something left in the tank after being written off.”

Thompson, Green and Tatum were at the other end of the spectrum, as players whose performance in the Finals negatively impacted their league-wide reputations. Said the Western Conference scout of Green: “For a recognized team player, he hurt his team too often with his selfish outbursts.”

Legendary Michigan State coach Tom Izzo joins Colin Cowherd to discuss Draymond Green’s mentality and how he coached him without taking away his passion.

The Eastern Conference GM compared Green to another high basketball IQ, highly volatile defensive specialist: Dennis Rodman. The GM attributed Green’s struggles in these playoffs in part to Thompson’s, suggesting that whereas Rodman proved to be an impactful player for multiple teams — leading the league in rebounding for the Pistons, Spurs and Bulls and winning rings in both Detroit and Chicago — Green’s success may be attributable to his unique compatibility with Curry and Thompson, in both talent and personality.

“Rodman could take his show on the road, so to speak,” the GM said. “He was that kind of athlete. Draymond found that perfect fit with Golden State. I don’t see him doing what he’s done with anybody else.”

After Thompson missed two and a half seasons with two devastating injuries — a torn ACL and torn Achilles — it’s remarkable that he returned to contribute at a championship level at all. But after the vaunted marksman shot 35% both overall and from three-point range against the Celtics, the Eastern Conference GM questions how much of his previous form Thompson can regain.

“At this point, Klay has lost a couple of steps,” he said. “I don’t think he gets back to the old Klay, but maybe there’s something in between that and what we saw in the Finals.”

The question raised by the Finals about Tatum isn’t physical, but mental.

“Tatum is a finesse player by nature,” the GM said. “Trying to change that is hard. The greatest separator between great players and good ones is that mental part. When you needed him to step up, he was nowhere to be found.”

Translation: The Finals gave Tatum a chance to prove he had a champion’s mindset, even if he didn’t come away with the actual prize. He didn’t show that mindset. That’s the double-edged sword the Finals present: By reaching them, a player runs the risk of being exposed as not quite good enough to finish the deal.

While the Los Angeles Lakers, New York Knicks and LA Clippers are reportedly interested in Booklyn Nets guard Kyrie Irving if he doesn’t opt into the final year of his current deal and tests free agency, one Eastern Conference executive suggested that the Dallas Mavericks offer the best fit. The reasons were fairly straightforward: their GM, their coach and their star player.

One of the issues in Brooklyn is Irving’s apparent lack of respect for Steve Nash as a head coach. While both Nash and Jason Kidd had Hall-of-Fame careers as point guards, Kidd has a championship to his credit — as does Irving — while Nash does not. Mavericks first-year GM Nico Harrison apparently already has a strong relationship with Irving from his previous job as vice president of North America basketball operations for Nike, with whom Irving has had a signature shoe.

Where will Kyrie Irving wind up?

Kyrie Irving is reportedly not expected to play for any team on a one-year deal or mid-level exception. That could limit his ultimate landing spot if he chooses to part ways with the Nets. Shannon Sharpe predicts where Irving will play next season.

And then there’s Luka Dončić, the Mavs’ superstar playmaker. “With Luka, Kyrie doesn’t have to be your best player,” the rival GM said. “He doesn’t have to lead. But they do need a second scorer, and he can do that.”

A league source with intimate knowledge of the Knicks’ thinking dismissed the possibility of Irving moving across town. They don’t have the necessary salary-cap room to sign Irving as a free agent nor would they be interested in trading for him. It’s hard to imagine owner James Dolan even engaging with a team he considers a bitter rival, one that he believes encroached on the Knicks’ territory by moving from Rutherford, New Jersey, to Brooklyn.

“Not happening,” the source said.

The intrigue around Thursday’s NBA Draft involves not just where the next wave of talent will land, but how current players on the trading block might be involved as well. The players with the most potential to be involved in a draft-night trade, according to several GMs, include Phoenix Suns center Deandre Ayton; Indiana Pacers center Myles Turner and point guard Malcolm Brogdon; Washington Wizards guard Bradley Beal; Mavericks guard Jalen Brunson; and, of course, Irving.

Ayton, Beal, Brunson and Irving are potential trade material if their current teams question their ability to re-sign them and hope they can facilitate a bigger payday for the player by utilizing their Bird rights in exchange for the right to trade them and receive assets in return.

One league source is certain that Ayton will not be returning to Phoenix despite being a restricted free agent. He pointed to the Pistons as the likeliest landing spot, though a deal sending him to the Nets as part of a swap that moved Irving to a third team also was thrown out as a possibility. The Pistons currently have $27.4 million in salary cap space, second only to the Orlando Magic, and could open up as much as $47 million, which means Detroit could potentially make Ayton an offer that the Suns simply refuse to match.

Deandre Ayton and the Suns had contract disputes prior to the season, and he reportedly clashed with coach Monty Willams during their playoff exit in the Western Conference semifinals. Colin Cowherd explains why it is time for Phoenix to move on from the former No. 1 pick.

Because in most of these cases the players are pending free agents, restricted or otherwise, sign-and-trade contracts would be involved — meaning the deals wouldn’t be officially consummated until after July 1 and the league’s new calendar year began.

League executives are also keeping an eye on whether the Warriors are proactive in setting up sign-and-trade deals if it appears they are on the verge of losing one of their pending free agents, most notably center Kevon Looney. Both the Sacramento Kings and Charlotte Bobcats covet Looney, a league source said, and they are not alone. “The market for him is robust,” one executive said.

The Warriors are also going to face tough decisions in retaining Gary Payton II and Otto Porter Jr., both of whom played significant contributing roles against the Celtics. Porter started the last two games and Payton’s return from injury marked a noticeable improvement in their defense. Payton, 30, is a fan favorite, but this is probably his best shot at signing a lucrative deal, and the Warriors are already looking at a projected luxury tax bill of nearly $75 million.

“It’s going to be really, really hard to keep all of them,” the executive said. “Especially when so many teams think they are close to winning [a title] — or have owners pushing to win one and are looking for that last piece.”

Ric Bucher is an NBA writer for FOX Sports. He previously wrote for Bleacher Report, ESPN The Magazine and The Washington Post and has written two books, “Rebound,” the story of NBA forward Brian Grant’s battle with young onset Parkinson’s, and “Yao: A Life In Two Worlds,” the story of NBA center Yao Ming. He also has a daily podcast, “On The Ball with Ric Bucher.” Follow him on Twitter @RicBucher.

in this topic
Ric Bucher
Speak for Yourself
share story 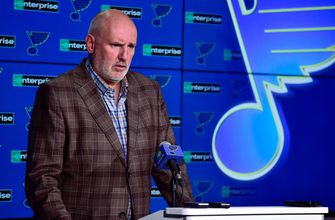 Forget upper/lower body: NHL injury response will be ‘not available’, 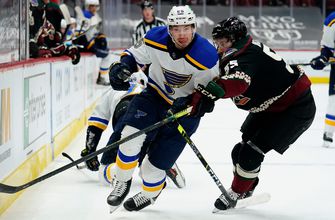 Blues fall 1-0 in seventh game of marathon series with Coyotes, 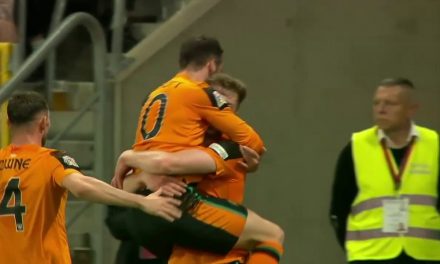 Ireland takes a 1-0 lead after Nathan Collins split the defense and scored, 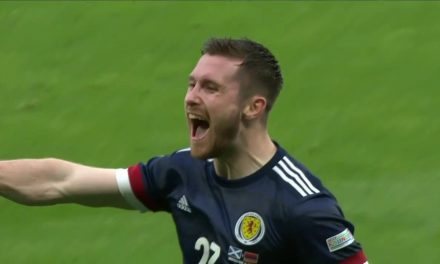 Scotland takes a 1-0 lead on Tony Ralston’s header in the 28th minute,