Who is running for CD 4 in Missouri to replace Hartzler?,

It didn’t take long after Congresswoman Vicky Hartzler announced her candidacy for the open U.S. Senate seat for Republicans to launch their own campaigns to replace her.

Missouri’s 4th congressional district — as it stands now — is a large and diverse expanse of the state, from Columbia sweeping west to just below Kansas City, stretching down to Pittsburg and Lebanon, and settling north of Springfield. It includes both Whiteman Air Force Base in Johnson County and Fort Leonard Wood in Pulaski County.

A social conservative, Hartzler was the second Republican woman elected to Congress from Missouri and assumed office in 2011.

Thus far, a handful of Republicans have launched campaigns to replace Hartzler in Congress, and Senate Majority Floor Leader Caleb Rowden said he’s “seriously considering” jumping into the race as is Sen. Rick Brattin. Here’s a look at who they are in alphabetical order. (This story will be updated.)

Longtime Kansas City news anchor Mark Alford announced his congressional campaign on a talk radio show on Oct. 27. Alford worked for Fox 4 for 23 years as an anchor before departing a few weeks ahead of his campaign launch.

“Each district is due the strongest voice they can elect who represents their will and their beliefs. I am that strongest voice for the 4th congressional district of the state of Missouri,” Alford said on his campaign website.

In a video posted to his Facebook page, Alford said “it has not been easy being in the media while also being a conservative Christian who respects law enforcement and wants to promote local entrepreneurs and small business owners.”

Kalena Bruce, a cattle farmer from Stockton, launched her candidacy for Missouri’s 4th congressional district on Aug. 18, billing herself as a “conservative outsider.”

Aside from managing the family farm, Bruce is a CPA who owns and operates an accounting firm in Bolivar where she focuses on small businesses and federal tax law. She touted her agriculture expertise and ties to former President Donald Trump in her announcement with a promise to “clean up Congress.”

A lieutenant commander in the U.S. Navy Reserves, Taylor Burks filed with the FEC to run for the seat on July 1 and has a campaign launch planned for later in the month at a popular pizza joint in Columbia. He said he will draw on “his record outside of politics” during his campaign. Burks also plans to publicly pledge to serve no more than 10 years in the U.S. House.

Burks is a former Boone County clerk — appointed by former Gov. Eric Greitens and the first Republican to serve in that position — who has led the Divison of Labor Standards (under the Department of Labor and Industrial Relations) since January 2018. He grew up in the Ozarks and was raised on his family’s farm before serving three combat deployments with the U.S. Navy.

State Rep. Sara Walsh kicked off her candidacy to succeed Congresswoman Vicky Hartzler on July 7. She has served HD 50 in the legislature — which encompasses parts of Boone, Cole, Cooper, and Moniteau counties — since 2017.

“My life is proof that in America anything is possible. But the American dream is under attack by socialists and career politicians in Washington, D.C.,” Walsh said. “I’m running for Congress to defend the American dream and to ensure our kids and grandkids have the same opportunities we had.”

Walsh is the chair of the Consent and House Procedure Committee as well as the Subcommittee on Appropriations – Public Safety, Corrections, Transportation and Revenue. Prior to her time in the General Assembly, Walsh served as a Member Services Coordinator for the Missouri Pharmacy Association, a staff auditor in the Auditor’s Office, and the Program and Outreach Manager for the National Newspaper Association, among other things.

Former state Sen. Ed Emery was the first out of the gate to announce his candidacy for the seat in mid-June. Emery died on Aug. 6 at the age of 71. He had been speaking at a campaign event when he suddenly collapsed and was hospitalized for several days.

“It is not ambition that drives me, but what I see as the clear abandonment at the federal level of Biblical principles, national heritage, common sense, and the values that have made America great,” Emery said. “The contempt for the truth and the perversion of justice must not go on.”

This story has been updated. It was originally published on July 7.

The post Who is running for CD 4 in Missouri to replace Hartzler? appeared first on The Missouri Times.

Audio: Sen. Tony Luetkemeyer’s Podcast for the Week of March 21

Letter from the Editor: A goodbye to Missouri, 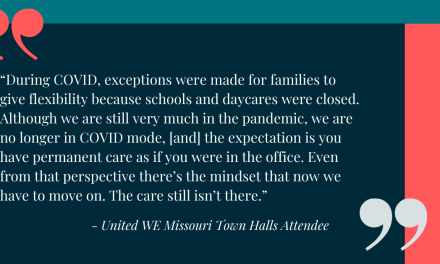