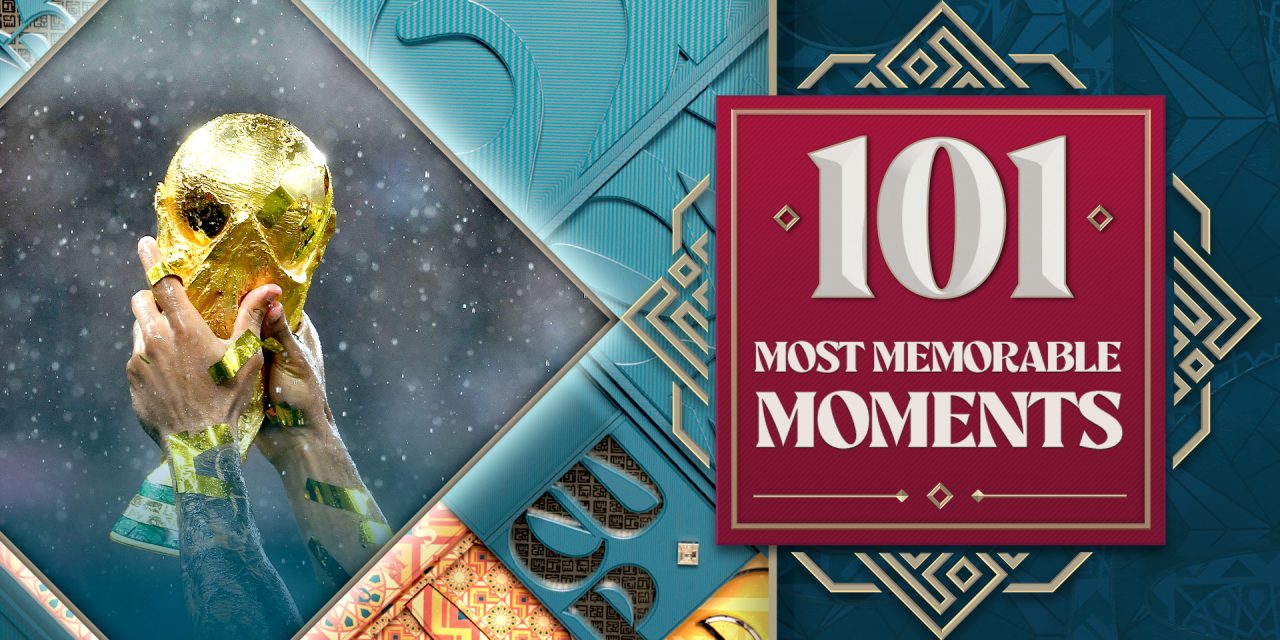 , In anticipation of the 2022 World Cup in Qatar, see all 101 of the most memorable moments in the tournament’s rich history.,

Over the span of 92 years and 21 tournaments, the World Cup has had so many memorable moments.

So every day until Qatar 2022, which will air exclusively on FOX networks starting Nov. 20, Jenny Taft and Doug McIntyre are counting down the 101 most memorable moments in World Cup history. Find out where your favorite moment ended up on our countdown.

Lionel Messi showed Nigeria goalkeeper Francis Uzoho that his right foot is just as lethal as his left, and reminded the world why he’s considered by many as the greatest of all time.

Messi led Argentina back from a disappointing start to the 2018 World Cup.

It would have been hard for Eric Wynalda to place his free kick more perfectly than he did; it helped that it came at the perfect time, too.

The USMNT’s deepest World Cup run was made by possible by Wyndala’s wonder strike.

Long before he coached the United States men’s national team at the 2014 World Cup, Jürgen Klinsmann scored a ton of goals for Germany, including this stunner against South Korea.

Jürgen Klinsmann set himself up for a perfect goal.

South Korea’s defenders didn’t know what to do when Cuauhtémoc Blanco broke out the Cuauhtemiña at the 1998 World Cup.

South Korea didn’t do their homework on Blanco.

A no-look scoop pass over the top of the defense with the outside of the boot? Michael Laudrup didn’t play fair.

Ebbe Sand was on the receiving end of one of the greatest assists in World Cup history.

José Luis Chilavert didn’t convert his free kick against Bulgaria at the 1998 World Cup, but he came as close as any keeper has since.

Who do you think appreciated the support of Japan’s fans more in 2018: Japan’s men’s national team or the stadium staff in Russia?

Japanese fans take fandom to the next level

These Japanese fans did their part to keep the stadium clean.

The power and precision of Sunday Oliseh’s shot stunned the Spanish giants of 1998. I mean, how do you stop that?

Yugoslavia paid the price of giving Lothar Matthäus ample space to operate in the midfield, and his German teammates watched him collect.

Matthäus’ long-range effort was one of his two impressive goals in Germany’s 4-1 victory.

Mexico’s fans were hoping for a draw against Germany; what they got was arguably El Tri’s most surprising result on the World Cup stage.

Chucky Lozano was the hero in Mexico’s 1-0 win over Germany.

It’s safe to say this would have landed higher on our countdown had Pelé stuck the landing.

Even Pelé’s are highlight worthy.

West Germany were the favorites to repeat as world champions in 1994 … until Yordan Letchkov decided they weren’t.

This one’s pretty self-explanatory for Mexico fans: It wasn’t a penalty.

Arjen Robben drew a controversial foul call in the box and then the Netherlands scored on a penalty kick.

In 1994, Brazil’s Bebeto gave his newborn son the best birthday present ever: a celebration at the World Cup.

Brazil’s Bebeto scores against the Netherlands and celebrates by rocking the baby for the birth of this newborn child.

There have been two golden goals in World Cup history; Laurent Blanc’s sent his team to the quarterfinals, where they’d win en route to their first-ever World Cup trophy.

Pelé’s Brazil teams are the most famous to win back-to-back World Cups, but they weren’t the first.

Oleg Salenko already had the golden boot secured when Russia were eliminated in the group stage of the 1994 World Cup.

84. The Secretary of Defense

Tim Howard did everything he could to save the United States from elimination at the 2014 World Cup, and his record-setting performance in the USMNT’s loss to Belgium earned him the nickname “Secretary of Defense.”

Tim Howard set the WC saves record for the USA against Belgium.

Hungary showed no mercy for El Salvador in their record-setting 10-1 win at the 1982 World Cup.

Hungary scored 10 goals against El Salvador, making it the most lopsided result in World Cup History.

The United States men’s team would have had a fair chance of making their first World Cup semifinal appearance since 1930 had it not been for a missed call.

Germany get away with handball

The USMNT could have evened the score with a converted penalty.

81. England come back in extra time

Fernando Muslera didn’t stand a chance against this shot.

South Korea’s win over Germany wasn’t enough to push them through to the knockout stage, but it did eliminate the then-reigning champions of the world.

England’s misfortune with penalty shootouts took a brief break at the 2018 World Cup.

Although Iran beat the United States on the pitch, their gesture was the talking point of the game after the final whistle.

Members from Iran gifted the USMNT bouquets of flowers.

How did the sideline referee miss this one?

Brazil’s Rivaldo was seen flopping, but it was Turkey’s Ünsal that got the red card.

With the flick of his neck, Robin Van Persie helped the Netherlands get a consolation prize against Spain, who beat them in the 2010 World Cup Final.

Even when Maradona wasn’t scoring, he controlled the tempo of the match.

Argentina sent Brazil home after Maradonna and Caniggia connected for a goal late in the match.

Josip Šimunić was able to stay on the pitch after his second yellow due to a mental lapse by the referee.

Mexico needed every minute of stoppage time to upset the Dutch.

Luis Hernández scored a huge goal to give Mexico the victory.

Scotland couldn’t stop the Netherlands from scoring at Argentina ’78.

Gemmill’s goal not enough for Scotland

Archie Gemmill scored one of the best solo goals in World Cup history.

How did Xabi Alonso manage to stay on the pitch after this nasty challenge from Nigel de Jong?

Salvatore Schillaci had a fantastic World Cup for the Italians.

Kuwait’s last World Cup appearance was a memorable one and not for anything the players did.

The Prince of Kuwait came onto the field to protest an errant whistle heard during France’s fourth goal.

There were no winners in the fight between French striker Nicolas Anelka andcoach Raymond Domenech.

Anelka had some choice words for France’s manager, which resulted in Anelka being sent home from the tournament.

Argentina were heavily criticized for not being more aggressive with their attack vs. West Germany.

In 1990, Argentina lost to West Germany in the World Cup Final and became the first team to not score a goal in the championship game.

Japan thought they had punched their ticket to the World Cup semifinals, but Beglium had other plans.

This page will be updated every day through the start of the World Cup on Nov. 20. 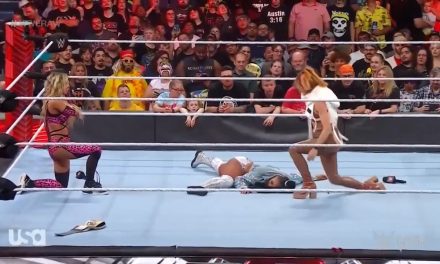 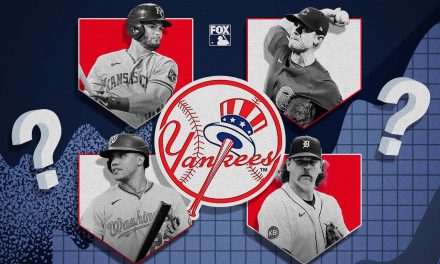 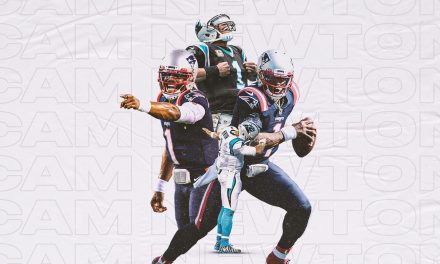 Is Cam Newton’s career over after Baker Mayfield trade?, 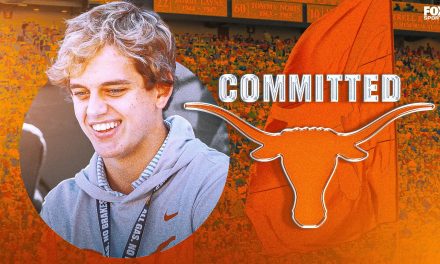